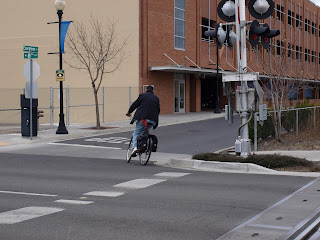 An unexpected family reunion of sorts has broken out in my life recently. Blood relatives were not invited though. This reunification honors my “other family”. At least that’s how I used to refer to them. In the last month, I’ve heard from each of the three principals from my Army days: Jon Neiss (not even sure that I’m spelling that correctly – it’s been so long), whom I shared an off-base apartment with; Tim Egan, who was my hot rod/drag race mentor of the era; and Biker Bob Crider, who, though a civilian, was our communal glue - much as Bob Skinner was to the Surfers. The four of us eradicated a lot of beer and drivetrain parts, while collectively stumbling to our individual futures. We last saw each other in 1975.

It seemed curious that these three characters would reappear at once in my life. Then I got a call from Dave Wood. Dave and I grew up mere blocks apart in the 60’s, became street punks together, and continued our adventures until I enlisted in the Army in ’73. We always referred to each other as brothers.

As one with a deep-seated belief that everything happens for a reason, I carefully searched these reunions for meaning before conceding that some things in life must remain mysteries. But now I get it: Don't forget where you came from.

When I took the leap of faith into full time writing, I did so with full awareness of the pitfalls. Submissions to publishers could be rejected like yesterday’s coffee, and said publishers have more pressing priorities than prompt payment for the work they do accept. I’ve been on the short end of this stick more than once now, but these instances were thankfully brief and far between. But immediately after being contacted by the aforementioned ghosts of times past, I found myself revisiting the haunts of my homeless adolescence. I’m living in my car now. The last time I did this, that meant the flimsy fiberglass bucket seat of my Anglia street racer. I was young enough to take it in stride then. Today, things are different. I struggle to get comfortable, even in the padded cloth seats of my Honda, and a super duty sleeping bag still isn’t enough protection from the night chill. All-night truck stop diners are still available for respite, but are fewer in number and higher in price. And I have no friends there anymore, other than the imitations from waitresses gaming for tips that I can’t provide.

The differences between “now” and “then” go deeper than the above examples, however. The biggest change is that, back when, “love and peace” was the mantra that united us street people. That ethic has been almost completely replaced with fear. Young roosters on Stingray bicycles and grey-haired bag ladies alike are now projecting a mean spirited and aggressive demeanor that would make Tom Waits nervous. Mental illness is rampant, and hopelessness reigns. None of this is really news, but the reality slap of it all has my attention. Have I really been so out of touch while toiling away in my little photojournalist world? Oh yeah. Big time.

So I decided to embrace my new/old family straight on and engage them in conversation. My hope was to express some empathy that might light up their eyes a bit, and maybe even garner some striking portrait photos for this blog entry. What happened instead was predictable: Enough rejection to fill a hundred publishing positions. In their defense, I must admit that all concerned expressed themselves clearly and honestly, which is more than I can say for myself. My selfish motives were to face my fears, prove to myself that I was an okay guy, and impress you with stark photos of the desperate people I’m now surrounded with – a perfect recipe for failure. An amalgamation of their combined responses reads like so: “Shut the fuck up and give me a cigarette. And gimme some money. And fuck off!” These are my people.

And so I found that I couldn’t photograph their faces for this family album. It felt like betrayal. Like exploitation. Chickenshit. This growth opportunity that has been offered to me hasn’t been for naught. I’ve already learned some ugly/beautiful truths about myself, and have only scratched the surface. More will be revealed. In the meantime, I’m working as conditions allow. I have computer access three days a week at the public library, for an hour at a time. The recording project at James Drive Studio has been productive, as has the weekly fabrication session at Custom Metal. I received a paycheck from SourceInterlink last week, and they owe me another. Once it arrives, I can go shopping for a room to rent and get back to a semblance of productive routine. Until then, it’s cold out here, but new teases of spring are appearing every day. I am a hopeful tourist in my own past. But (more blunt truth) I’m secretly anxious to turn my back on the unfortunates who walk my old beat, and to isolate in comfort. Thus I remain painfully human, but willing to grow, if absolutely necessary. 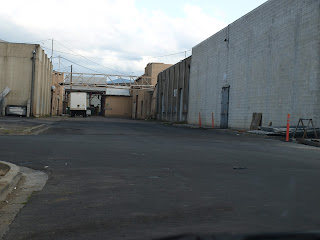 You’ve seen this backstreet on the blog before. I used to street race here, decades ago. I’ve used it as a backdrop for feature shoots, and it was a central location in Chris Darland’s American Thrill Ride film. Now it’s a quiet place to kill time for myself and other aimless drifters, during daylight hours. It should be avoided at all costs after sundown. 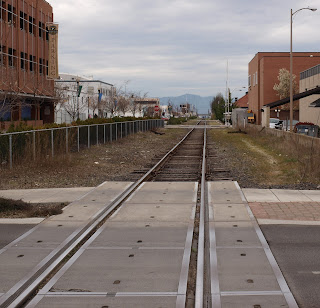 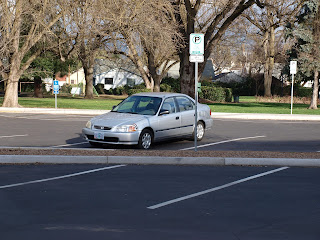 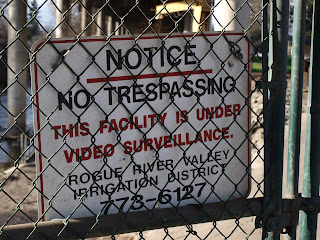 More small town landscapes (in the stead of human portraits), shot in a pedestrian hour around my 1966 – 1973 stomping grounds. It all looks the same, but everything is so different. 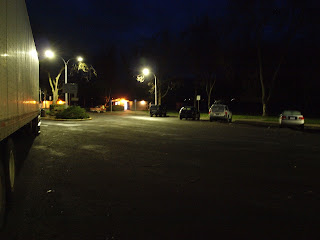 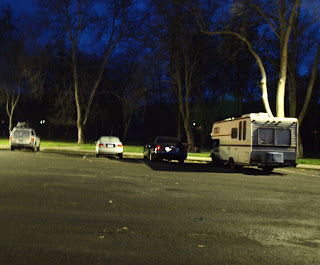 I’ve been spending my nights at this great rest area on I-5. It’s just past town (where most travelers have done their business), so traffic is light. These cars (my little Honda at center, with fogged windows) park in the same spaces every night. We nod at each other, but haven’t spoken yet - it’s only been a couple of weeks. For these few dark and quiet hours, we all know what to expect. Stability like that is priceless, in our situation. Bonus points to the plastic sheet duct taped onto the white Explorer, and the giant camper on the tiny Toyota pickup. The black Lincoln was a one-night-stand. 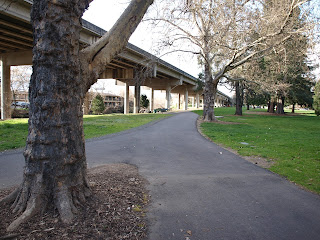 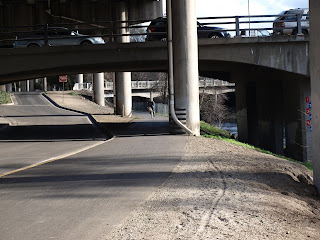 Like most urban areas today, Medford boasts a bike path running through town. Traffic is half taxpayers in need of exercise and fresh air, and half are crazed tweakers in search of victims. It’s open season here. We’ve had some ugly incidents (understatement).

Yet another old friend popped up last weekend, in a most unexpected place. My old sidekick “CC” sent me an e-mail with files attached. Imagine my surprise when I opened them to find these images of my scruffy old street beater on display at the Portland Roadster Show. Huh?! One of CC’s co-workers (at Steve’s Auto Restorations) was involved in organizing the show and needed more meat on the floor, so the old “Son of Godzilla” Morris was pried from hibernation in CC’s garage. It was too groggy to run (or even walk), so they chauffeured it to the show in the SAR transporter, which is much more accustomed to hauling around million-dollar perfection than this pie-in-the-face to such vehicles. CC took a lot of guff at the show about the “prima donna trailer queen” and decided to drive it home afterward, no matter how it ran (now that’s more like it!). SAR shop foreman Chuck Barr followed in his meanass Merc, and reported “cool flames” from the Morris’ 4” collectors all the way across town, providing a much better show than the previous static display. Color me baffled, but proud. I think. 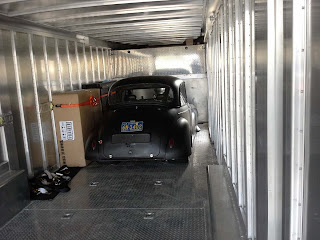 I never thought I’d see this, if I lived to be a thousand years old. I love the novelty of it though! 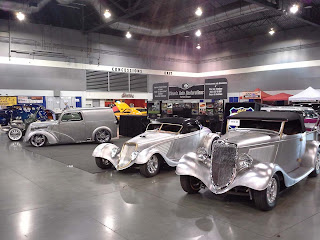 Thanks for the use of your transporter, guys! Any fluids on the polished floor are CC's fault, not mine! 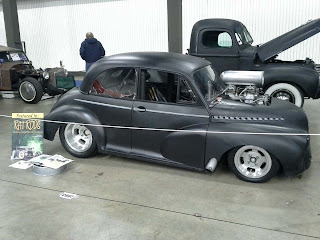 It’s showtime! Special thanks to CC and Chuck for promoting my book! I’m touched. 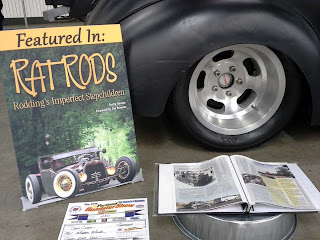 After years at Steve’s, CC is now definitely show savvy and even included the Rod & Custom feature story of our epic journey to Bonneville in his display (I love the oil drain pan book stand). Cool. Those Japanese Ansen Sprint knockoffs came from a crashed Nebraska sprint car. They look okay now, but required weeks of grinding and sanding, while sitting crosslegged on my apartment floor. They’re now paper thin. Every time I see them, my back aches. 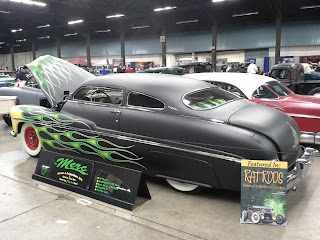 Chuck Barr’s Merc illustrates an important point: Somewhere in the rod and custom continuum, everyone forgot what Mercs were about - their visual impact carried a threatening edginess that thumbed its nose at the “pretty boys” they later became. Chuck backs up the look with a stout Hemi. Perfect. It makes even the Pharaohs’ (candyapple) Merc look lame, in my biased opinion. The Merc and Morris surely strained some necks while blaring and flaming across Portland in the middle of the night.

Next week: Back to normal – hopefully.
Posted by Scotty Gosson at 12:17 PM No comments: