As you read this from your igloo, while watching the March Meet re-runs on Bangshift.com, I'm lounging under a palm tree in warm sunny California, sipping a cool drink. I'm down here to pick up my new daily driver from street/strip warrior Rick Smith (the guy who now runs my old Anglia race car - the BTU). The only interesting aspect of my new driver (a beat silver '98 Honda 4-door stealthmobile) is camel-like gas mileage, compared to my station wagon (50 hwy vs 12). But it looks like a flathead V-8 should slide right into it. Yes, this means the Bi-Polar Bear is going away ASAP. Look for it on the Barrett-Jackson website - or maybe Craigslist. Rick has lined up some photo shoots for me while I'm down here, then it's back home to God's country and my old familiar keyboard. I should have road trip photos for you on next week's blog.

I checked on an apartment earlier this week. Found my dream home above Roger Huffman's workshop, up in the mountains. Great place, with a panoramic view and all the rust dust I can breath in. The price was beyond my means, but I did snap some photos of the shop while I was there. 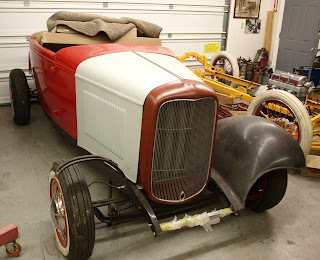 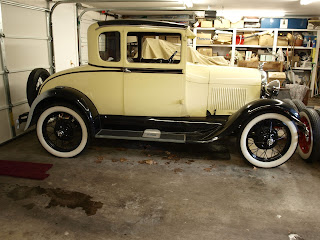 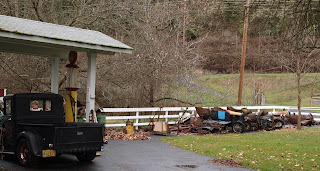 A couple of Roger's many toys - he has way too many to post here. The late model ('31) truck in the lower photo is his going-to-town version. Roger was wheeling his daily driver '28 beater pickup on this day.

SCENE OF THE GRIME

Afterwards, Roger hopped in his Model A pickup, I crawled into the Bi-Polar Bear, and we bombed a couple of miles down the road to Dr. Lockjaw's shop for a surprise lunchtime visit. 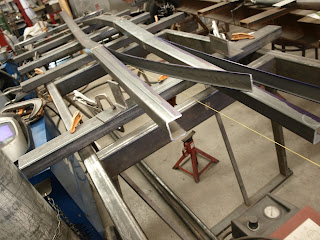 The frame rails we tapered last week. This what fell on my toe, causing me to walk in circles for three days. 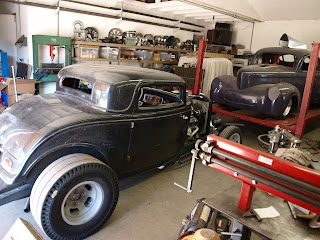 Dr. Lockjaw's driver, snuggled up to a customer's street/strip Willys. 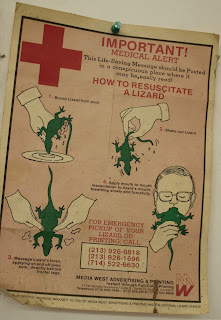 PAT FOSTER: A DAY IN THE PARK

Veteran chassis fabricator, Dragster/Funny Car pilot, and all-around hot rod crazy Pat Foster was one of my heroes from the early 60’s until his recent passing. His son Cole is a highly respected rod and custom builder in his own right. So when Cole posted the following story on his Facebook page last week, I was all over it. The tale of Pat’s day in a miniature sports car is just too fun not to share with you, so here it is, verbatim (but for some light editing). I added the dragster photo below as a visual aid. 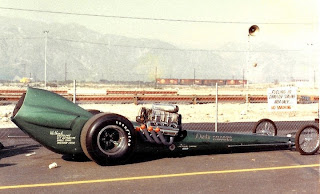 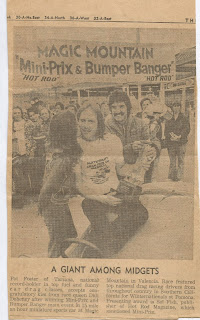 As told by Cole Foster:
“Found this newspaper clipping today. Tell what I know.......

Early 70s, and very close to the grand opening of "Magic Mountain" in California (now “Six Flags”). It might of been pre-opening day. Well, Hot Rod magazine hosted a day for the stars of NHRA drag racing there, the park was closed to public.

Like Autotopia at Disneyland, there’s a wall around a track you ran on. You could gas ‘em and brake ‘em and steer ‘em, but they had a cement curb running under the cars that pretty much turned them for you if you didn’t. And of course, there were governors on them - a little kid’s put-put ride. I’m remembering more as I go. They took like 20 brand new lil race cars off the track and the guys were supposed to race down the walkways around the park. If you have ever been there, the walking paths are banked, even some elevation changes. They ran banners to mark the track. Dad said they each had a co-pilot from the press. So they take off on the practice lap, maybe 10-15 MPH, and as soon as they get to the far side, they all jump out of the cars, lift the motor covers, and in a few seconds the governors were off and guys were tweaking the carbs, leaning them out a bit! Snake, Goose, Kelly Brown, Butch Leal - all the guys were there.

Dad said it was the most fun you could have with your clothes on. I’m telling you, 20 young fearless, super-competitive pro drivers and 20 scared-shitless news and magazine writers absolutely demolished anything near their path. Now these things are going 40 MPH, three abreast, headed for Turn One, and nobody's backing off. They ruined the cars, the landscaping - Dad said someone hit an entrance to another ride at some adobe archway and knocked it down - fiberglass and carnage strewn everywhere. Total mayhem. What was Magic Mountain expecting? A nice story in the paper to promote the Grand Opening! But anyhow, dad was the big winner! They didn’t ever do that again, for sure.”


To get you in the mood for springtime barbecue, I leave you with an inspirational image of some smoking meat. 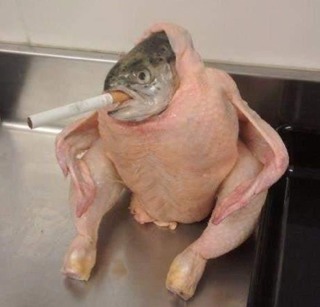 Okay, I gotta panic! See you guys next week. Until then, stay warm and dry.

Posted by Scotty Gosson at 7:50 AM No comments: