Jangleguy and Dr. Lockjaw Get Old 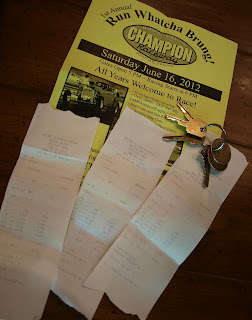 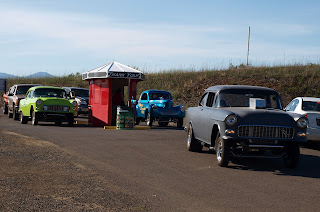 The Good Doctor (AKA Jamie Ford) and myself (secret code name: Jangleguy) aren’t getting any younger. Nobody told us, so we were the last to know. But this weekend at the drags, we finally caught on. Although our friendship was born of a shared reverence for grassroots drag racing (see Doc’s ‘Tetanus II’ in the Ballad of Dr. Lockjaw post, and my ‘Son of Godzilla’ in various posts), our racers have been parked for the last two years, due to time and budget realities. So we’ve been keeping sane by amusing ourselves with our daily drivers.

Technically, Doc’s driver is strictly a summer car. And in one of life’s most cruel but poetic ironies, the master metal smith now finds himself piloting a fiberglass car. Doc’s dream car had long been a Deuce coupe and he began collecting pieces for the build about 15 years ago. It finally hit the road last fall with an affordable plastic 3-window wrapper over a period drivetrain and chassis. Mine is a dedicated daily beater, neither cool nor fast. That story is told in the Bi-Polar Bear post.

Curmudgeons that we are, we chose to boycott this weekend’s Medford Cruise on general principal (as usual), but decided to take our drivers to the Medford Cruise Stoplight Drags, just to see what they’d do. This was the first time either of us had run non-race type cars at the track and what a revelation it was! We both really enjoyed breezing through tech and lounging in the staging lanes (neither of us so much as checked tire pressure). We arrived early to score shady spots in the staging lanes and rolled our windows down to watch our buddies try to fend off heat stroke while strapped into cramped aluminum cockpits in pressure-cooker conditions. They were already exhausted from nerve wracking tows of various distances, then stressing over last minute tweaks before class qualifying began. 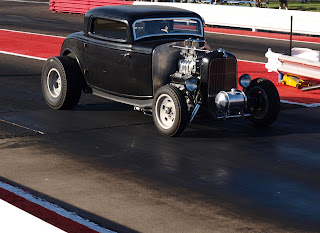 First up: Doctor Lockjaw’s Coupe. Doc drove 30 miles into town to race. It was hot (92 degrees), but he cranked the windshield out and caught some breeze. At the track, he uncapped his homebrewed headers and deemed the car fit for battle. The obvious focal point is the Cragar 4-71 setup on the 383 inch Chevy. It’s backed by a Muncie 4-speed and 9” Ford rear (I believe the gears are 3.55s). He vowed to make a tentative first pass, but couldn’t help himself. That’s when he discovered the shift linkage wasn’t adjusted precisely enough for bang shifting. Instead of crawling under the car in the gravel pits and adjusting the linkage, he chose to live with it. The Hurst slicks were no match for the slime carried onto the track by the street tires on the Cruise participant’s cars, so prodigious wheel spin must be factored into Doc’s best run (out of two), a 12.99 at 108 MPH. That’s a conservative-guesstimate 12.30, with traction. 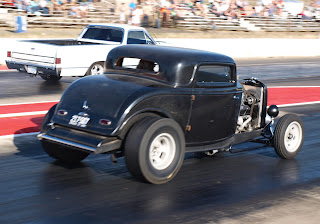 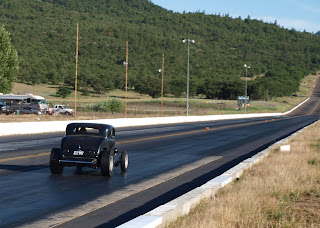 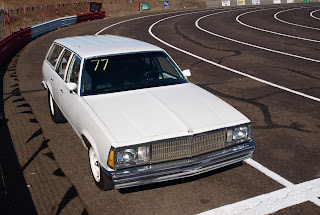 The Medford Cruise Drags are limited to pre-’73 cars, so I waited until the next night to run my late model car at the Run Whatcha Brung Drags, which are open to anyone. More irony: Mister Jangleguy (known for my sub-90 inch wheelbase hot rods) is now down to one vehicle, bigger than all my previous rides put together: A colossal ’80 Malibu station wagon. My 91 degree commute was cooler and shorter than Doc’s (five miles), but like him, I rolled in, got in line and ran. I didn’t even bother to uncap the headers, as I was after baseline numbers before making some future changes to the car. I’m building a nice 9” rear, and will soon be swapping in a slippery converter, changing to a slightly more aggressive cam and cylinder heads – all changes that should wake the car up, while keeping around-town reliability and drivability intact (see the Bi-Polar Bear post for current snoozy specs). Frankly, I was worried. Every part on this car is beyond tired and I was really sweating the whiny TH-350 trans and spindly 7 ½” 10-bolt rear, as this is currently my only car and any breakage would be devastating to my moth-eaten wallet and holy shoes. Of course, once I staged, I instantly forgot all of that – it was party time. I made three back-to-back runs to get a baseline average from, hitting best numbers of 15.43 and 88.39, both on my first pass. By the time I staged for the second run, the track was slimed. The third pass was a waste of time. The average numbers were 15.57 (ET) and 87.85 (MPH). I’m confident that my planned changes will improve those numbers dramatically, without affecting in-town daily driver status a bit. And hey, if I have to drive this turd around every day, I might as well enjoy the ride, right? So I’m going ahead with the updates. 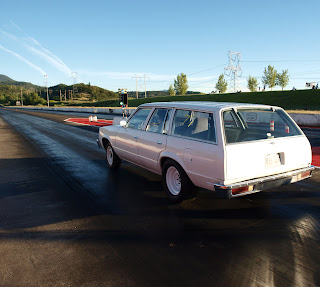 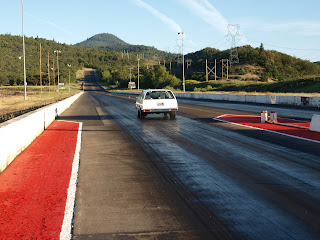 I handed my camera off to famed drag photog Dennis Vollmer, who snapped these entries for my scrapbook. Thanks Dennis!

Yeah, we’re aging. But that doesn’t mean we’re maturing. We still watched the fast cars with the same envy as when we were twelve. I miss mine dearly and hope to be back in the mix someday soon. Until then, I’m having fun going slow for peanuts. The Doctor recommends it, too.

Your reward for enduring us doddering old fools is a sampling of street cars from the Medford Cruise Stoplight Drags at Champion Raceway. Is your car in this bunch? If so, thanks for bringing it out and making our day! 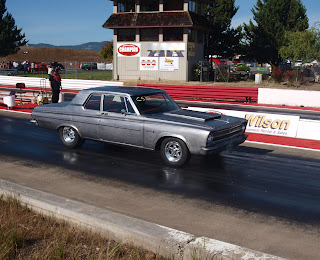 Look again. This Mopar coupe began as a 4-door sedan. 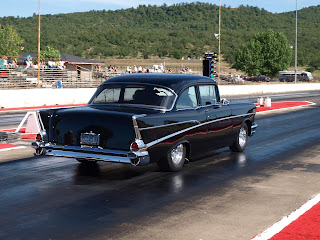 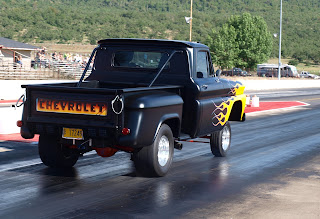 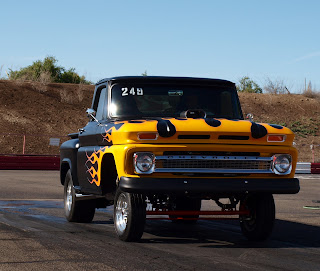 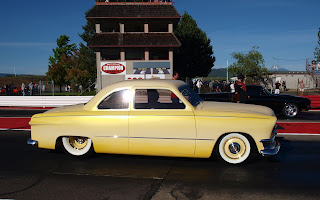 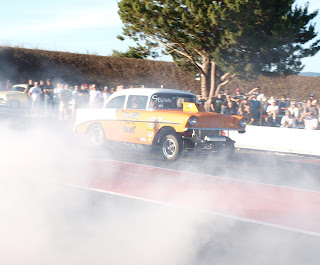 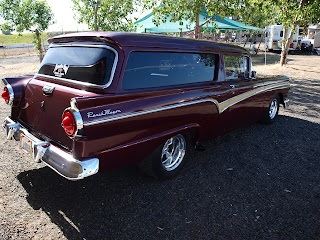 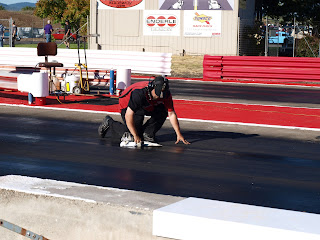 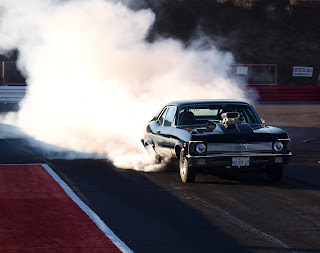 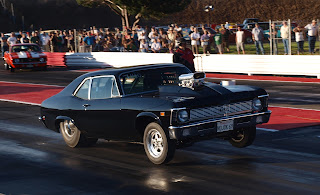 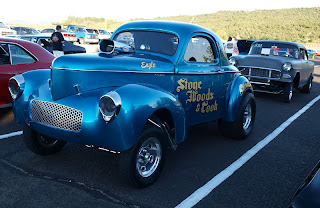 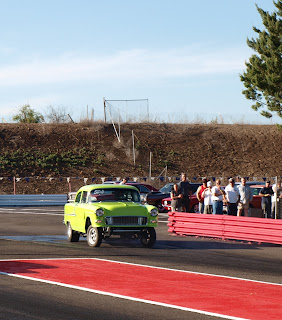 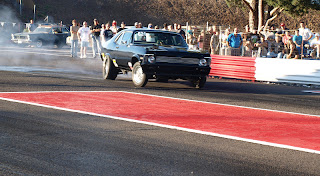 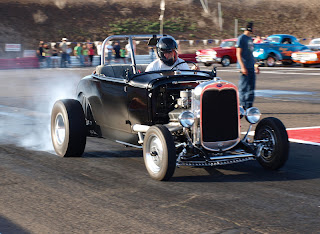 This guy was having a blast torturing his crossram smallblock Model A all day. 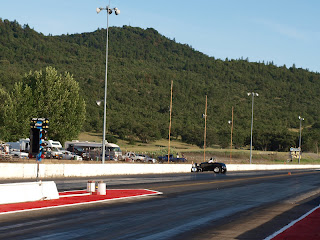 Every time he banged a gear, he'd turn the wheel a bit without realizing it. The odds finally caught up with him. 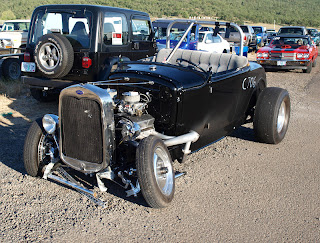 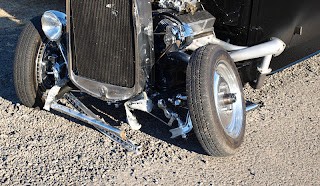 Luckily, the guy was fine and the damage is fixable. The Father's Day Curse: Every year I've attended this event, a street car has crashed. Weird. We hope to see this one back soon... 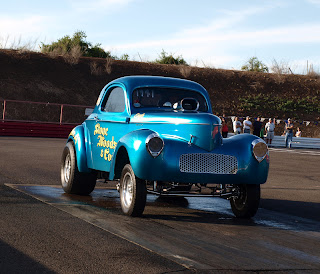 After lurking in the staging lanes all day, this beautiful S-W-C tribute car finally got as far as the water box, where he had a great view of the Model A crash. He slinked away immediately afterward and never made a pass. His loss and ours. Shame.

Posted by Scotty Gosson at 11:33 AM No comments: