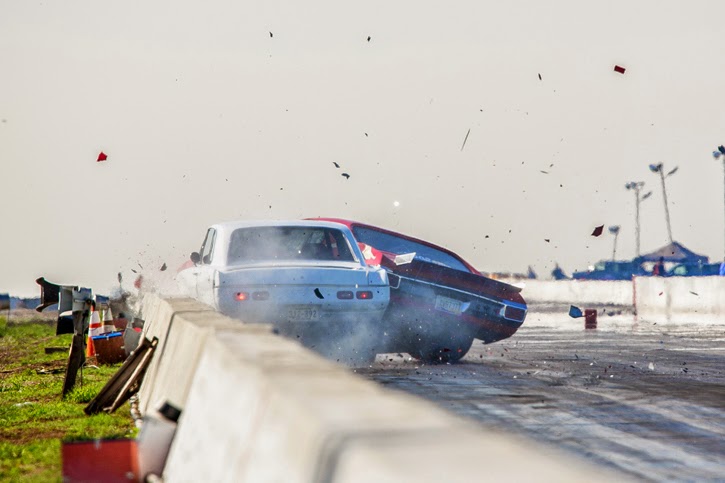 A bang-up time was had by all at the March Meet. This example is the result of the Dave Jones Malibu's spectacular half track wheelie that ended in even more drama when it connected with Will Matsch's Dart, prompting the never-asked question: Is there such a thing as too much power?

The Golden Age. For millions of us, this is it. Never before has so much horsepower been so readily available. No one can speculate whether this phenomenon will last much longer than the Musclecar era did, so most folks are savoring the moment to its fullest, while it lasts. Of course, great gobs of gow equals Goodbye Grab. No traction. And those who do find hook often take unplanned excursions into the stratosphere, as illustrated above. Such loose cannon behavior makes for excellent spectating, but lousy ET slips.

Those present at last weekend's March Meet (at Famoso Raceway near Bakersfield, California) enjoyed a public showing of unbridled force unequaled in the history of pre-modern-era drag racing. Our dyno numbers have finally caught up with our imaginations, creating a monster that must be trained to function as a team player. It's officially time for the transfer of power to be reconsidered. Drivetrains and chassis are no longer getting along, and their relationships are due for some counseling. The crux is where the rubber meets the road. Tire companies have been ramping up research and development of slicks and fast street tires in recent months, but at present, power is ahead of the curve. Chances are, gooier tires will soon be available to wreak yet more havoc upon drivetrain and suspension components, and strong-like-bull versions of those parts won't likely be far behind.

Until that precarious balancing act gets refined, I'm leaving the car in the safety of the shop, and buying tickets to the most decadent display of hamfisted leadfooting ever exposed to Earthlings. It's a matter of wallet. You enjoy the show your way, and I'll enjoy it my way. Everybody wins. 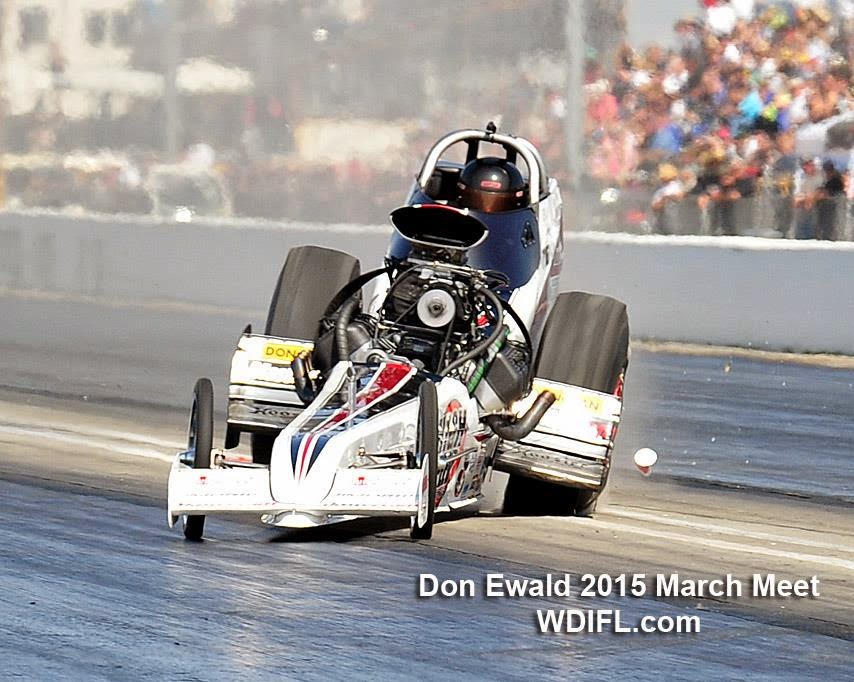 Bill Dunlap gets a physics reminder in his Top Fueler. According to online chatter, Bill was forced to toss his coffee cup (at right of struggling slick) and use both hands to survive overpowering one of the best-prepared track surfaces available anywhere. 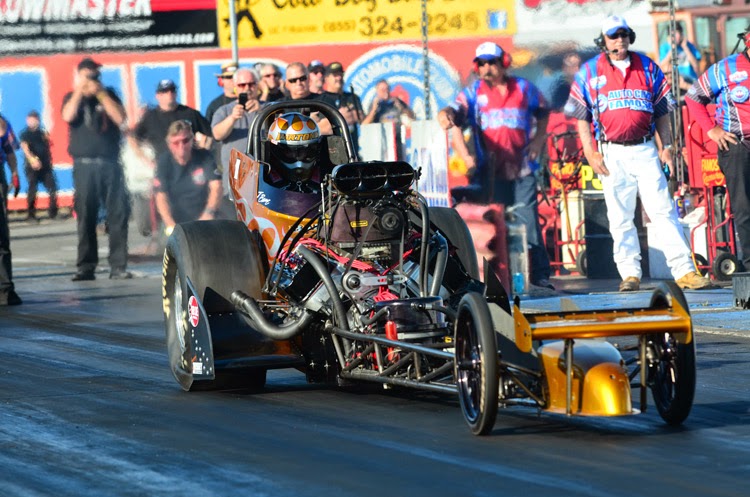 Top Fuel bully Tony Bartone hasn't lost a single round since venturing from his Long Island, New York digs, two years ago. He has qualified first, set Low ET and Top Speed, and won every event entered. This is the only human in Top Fuel to control the power available to him. Tony is mum on how that is accomplished. Nobody can blame him for that, but he hasn't made many friends on this playground. It's lonely at the top. (Photo courtesy of Dragzine) 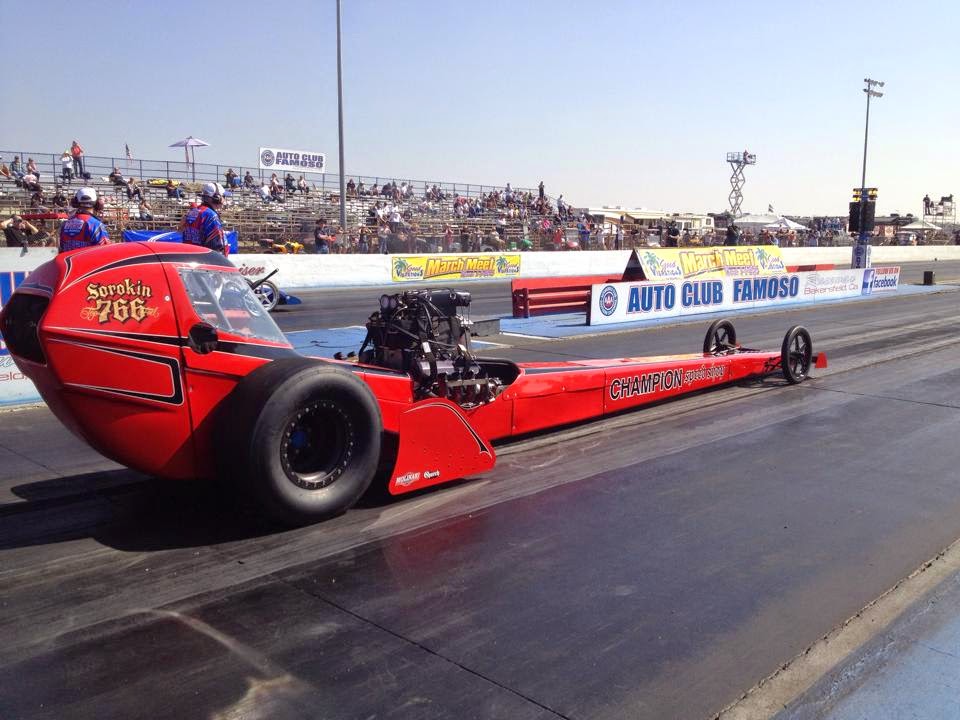 It's wearing new colors for 2015, but Adam Sorokin is still in the Champion Speed Shop T/F coupe. Crewchief Bobby McClennan introduced a new tune-up at the March Meet. The little engine with the little fuse (loosely described as a smallblock Chevy) needed some rounds to dial-in, but carried Sorokin to the final round to face Bartone. (Photo courtesy of Dragzine) 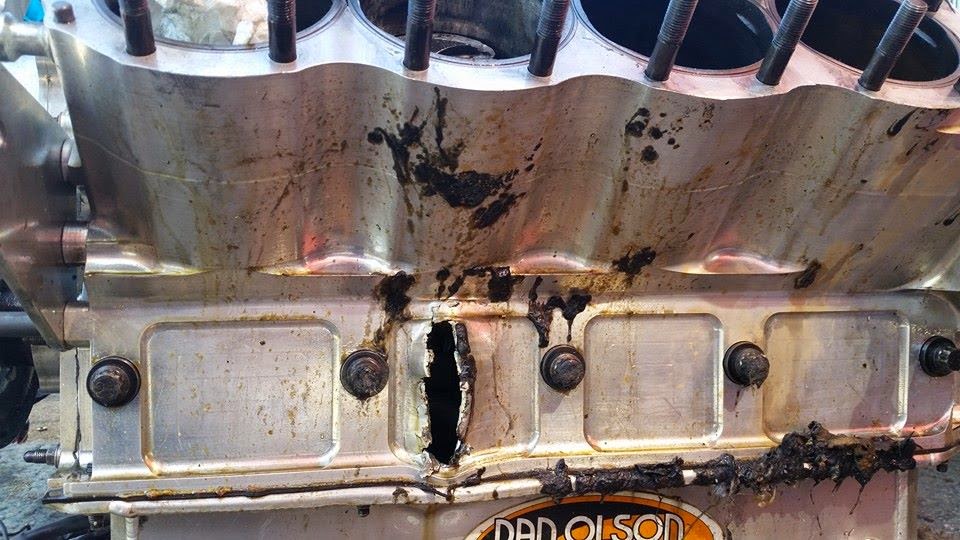 The coupe was a bit of a drama queen at Famoso. This is the price paid for a 5.70 run that nerfed Sorokin into the final round. For the sake of symmetry, the other side of the block looks just like this. Luckily, a fresh block and reciprocating assembly was pulled from Champion's stock, and they made the call to the final. Barely. (Photo courtesy of Dragzine) 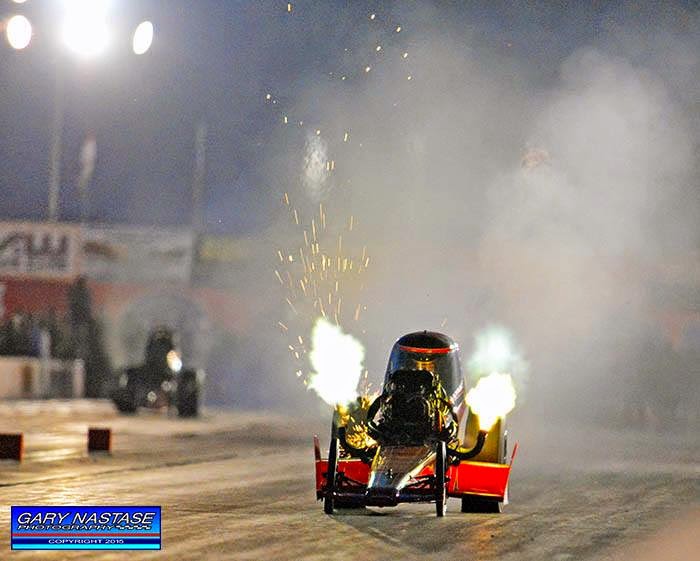 In the T/F final, Champion's SBC presented Bartone's Hemi with it's most serious challenge to date, a 5.79 to Bartone's unprecedented 5.53. Adam cut a mean light and stayed ahead of Tony until the zoomies began spitting piston slivers at 1,000 feet. But Sorokin's blast prompted Bartone to make his first ever full 1,320 foot run, finally exposing the true potential of the infamous New York sandbagger.


And now, our hand-selected images of horsepower on parade at Famoso, where the announcers delighted in reciting cubic inch totals as high as 900 - and that was just for the doorslammers. The downside: Only a chosen few can afford a stick big enough to carry into this melee. But the inspiration is free! 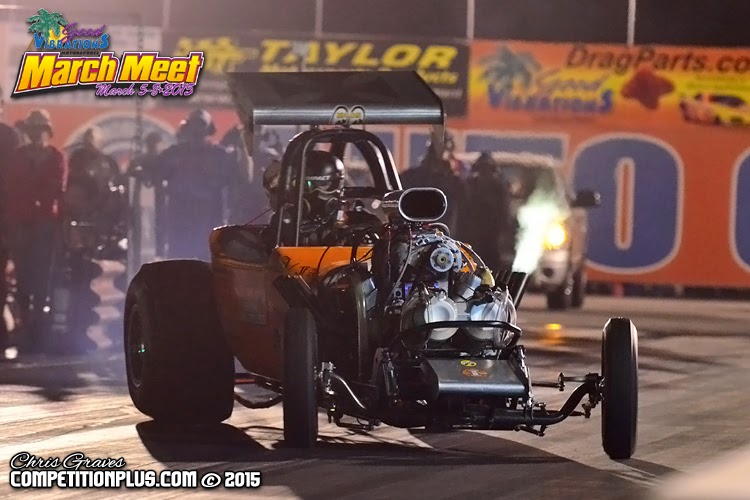 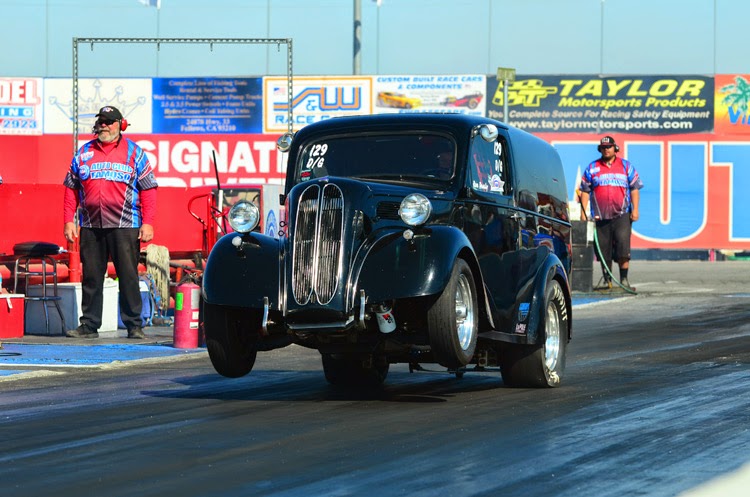 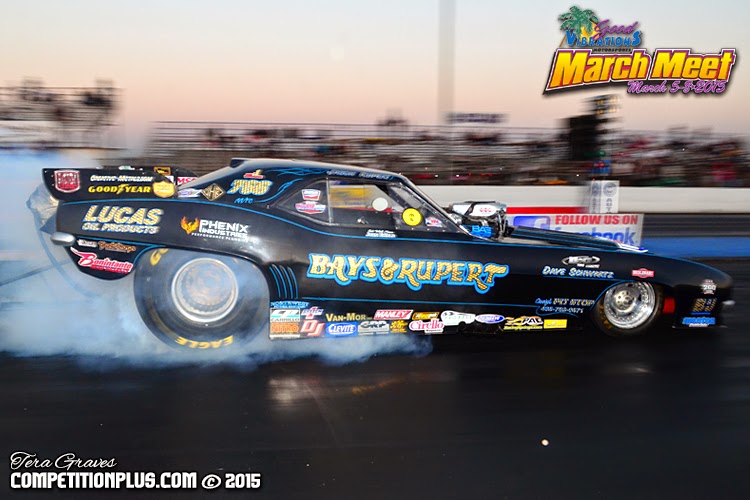 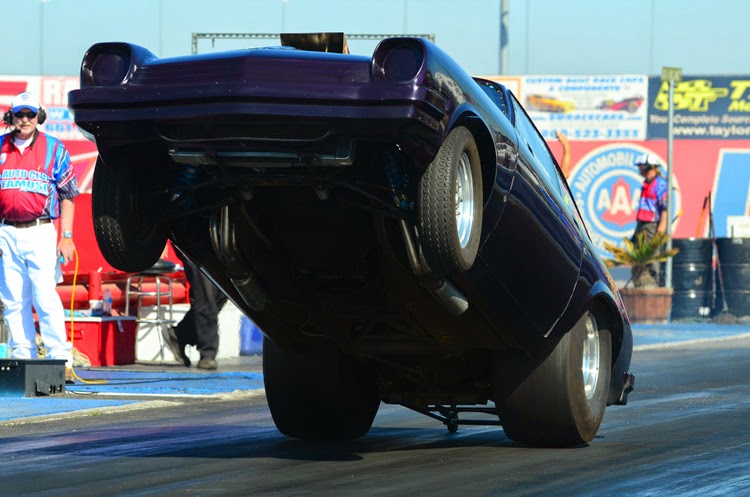 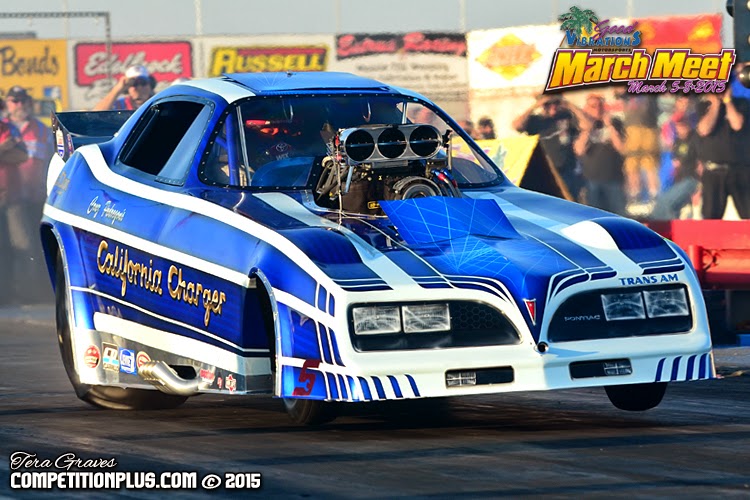 There's a reason why Big Show players like Cruz Pedregon vaguely claim current horsepower numbers to be "around 10,000": The dynometer has not yet been created that can calculate (or stand up to) today's power levels. 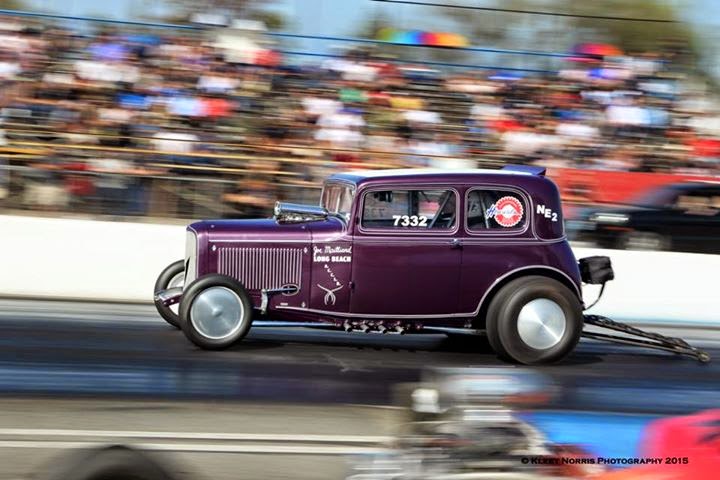 The Vulcans Vicky is running well into the Eights now, for cryin' out sakes! 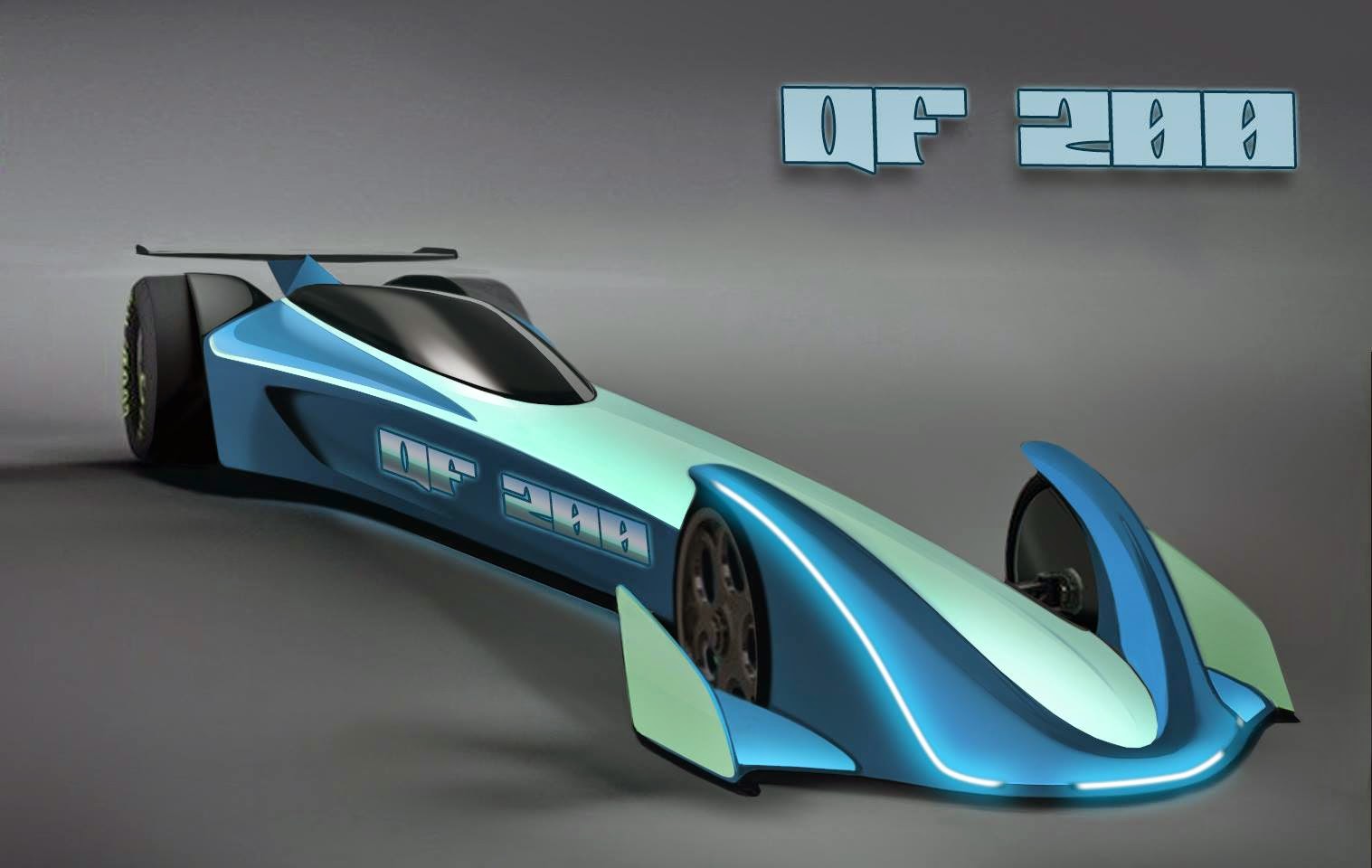 Melanie Troxel has agreed to pilot the next Quest For 200 electric dragster for a team largely comprised of mutineers from the Don Garlits and Lawless Industries Swamp Rat 37 crew. The only explanation to date is a terse press release from the QF200 camp: "The differences between QF200 and Garlits/Lawless reached the point of our separation from the project, although not of our choosing. We believe that those differences have since spoken for themselves in the performance of the vehicle", which never got closer to 200 than a lone 185 MPH run. No comment from Garlits and company at press time. Will Large Father's legacy end on this sad note of defeat, or is Melanie Troxel his new rival? Watch this page. (Image courtesy of BangShift.com) 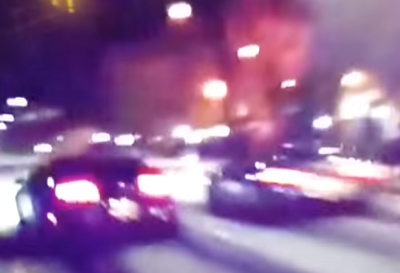 As if NHRA's suspension of Competition Licenses held by TV's Street Outlaws competitors weren't intriguing enough, the street racer drama bar has been raised another notch. Street Outlaws guest star Izzy Valenzuala (driving the Nissan GTR in the right lane) has been charged with vehicular homicide in connection with the deaths of two spectators at a Los Angeles street race. The Mustang in the left lane was driven by Michael Gevorgyan, who lost traction and struck the bystanders. Valenzuala and Gevorgyan are both being held on two million dollar bonds and each face 33 years in prison. (Fuzzy spy photo courtesy of Mr. X) 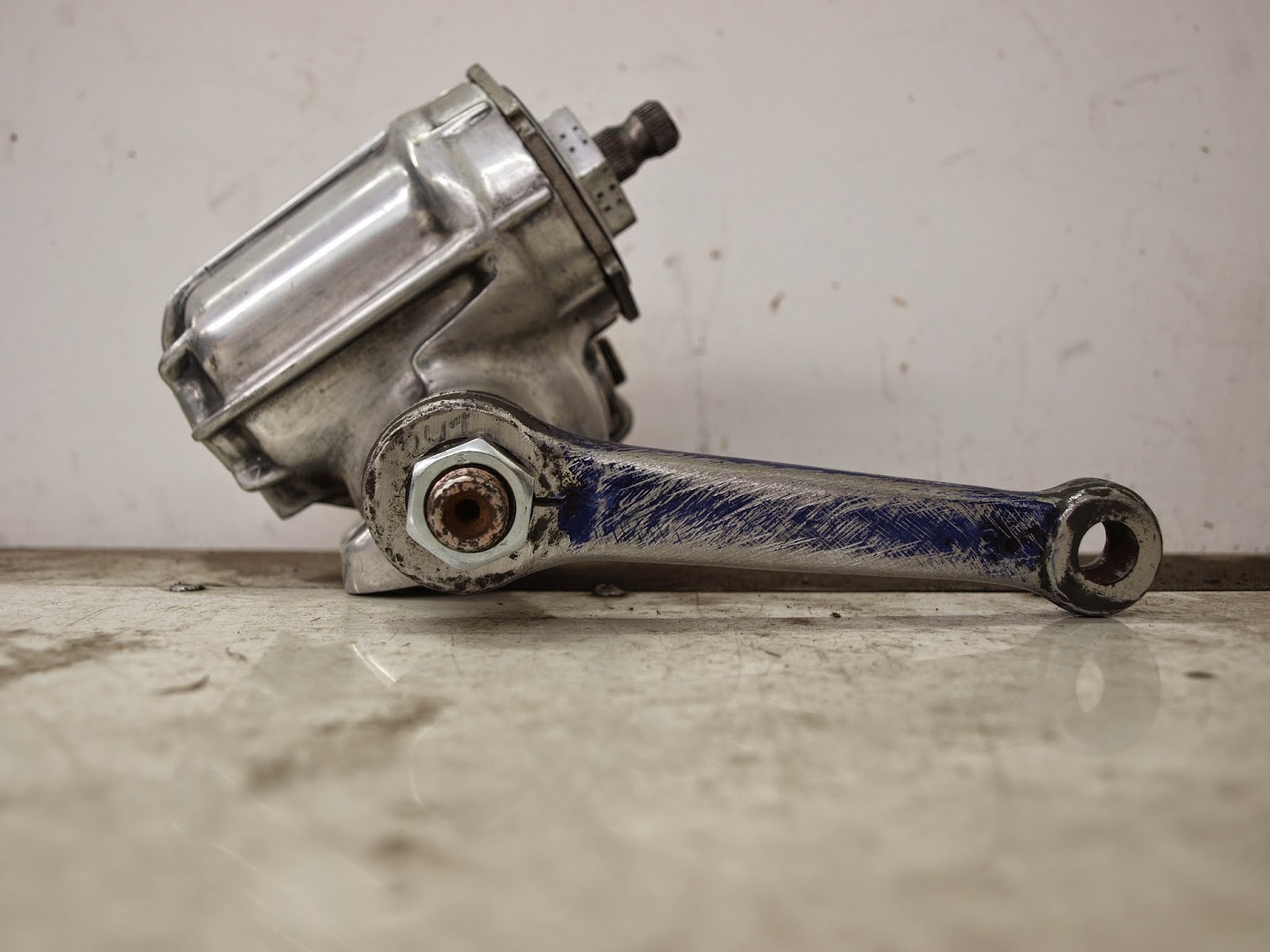 While I spent most of last week watching squirrel videos online, I did manage to hand-file the splines on the SGE Model A's pitman arm to allow 360 degree clocking to the Corvair steering box. 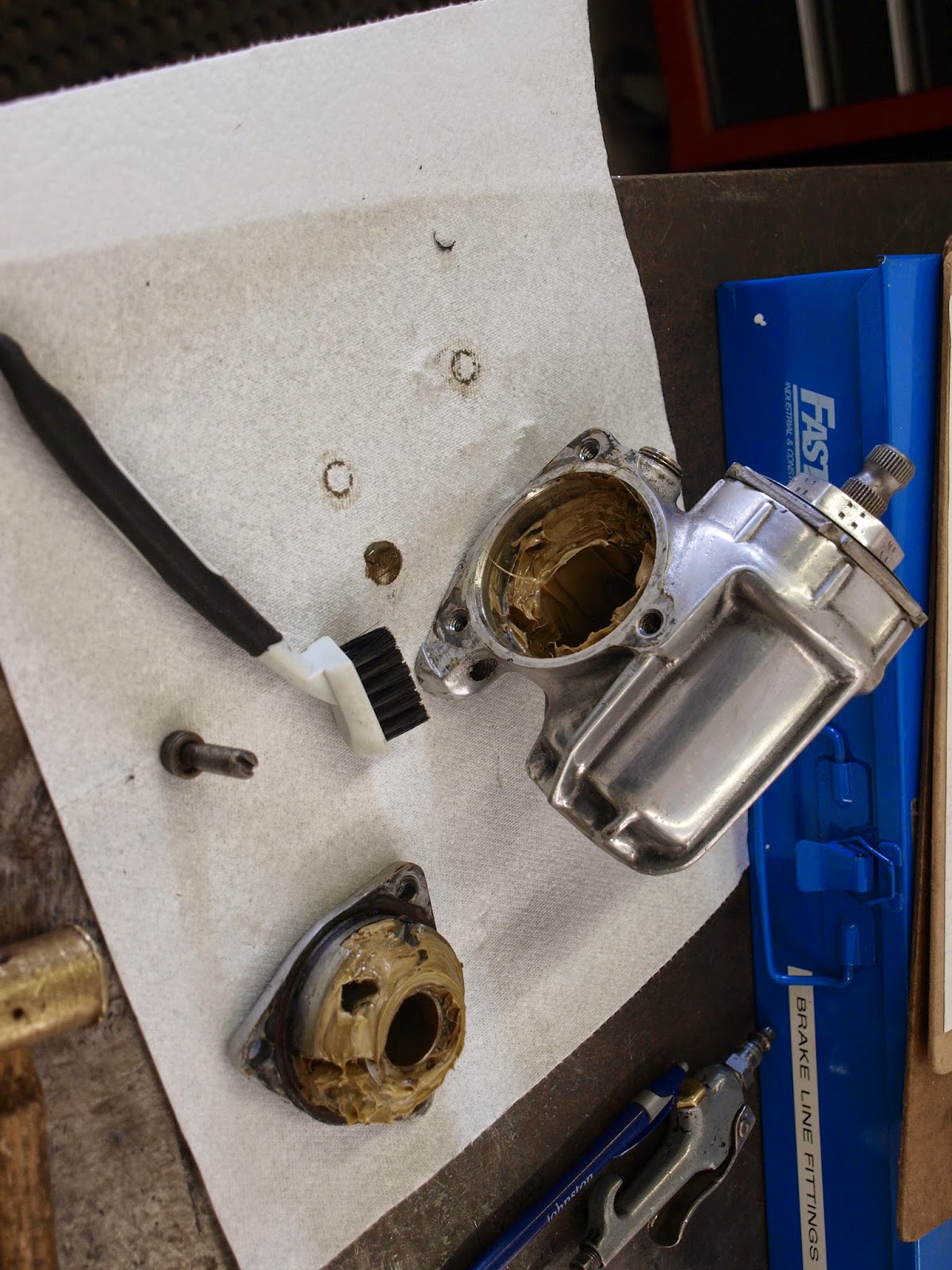 At Dr. Lockjaw's Custom metal shop on Sunday, the severed sector shaft that came with our box was replaced with a full length version from racing pal Rick Smith. If only I could clock this photo as easily. Damn you, Blogspot.com! 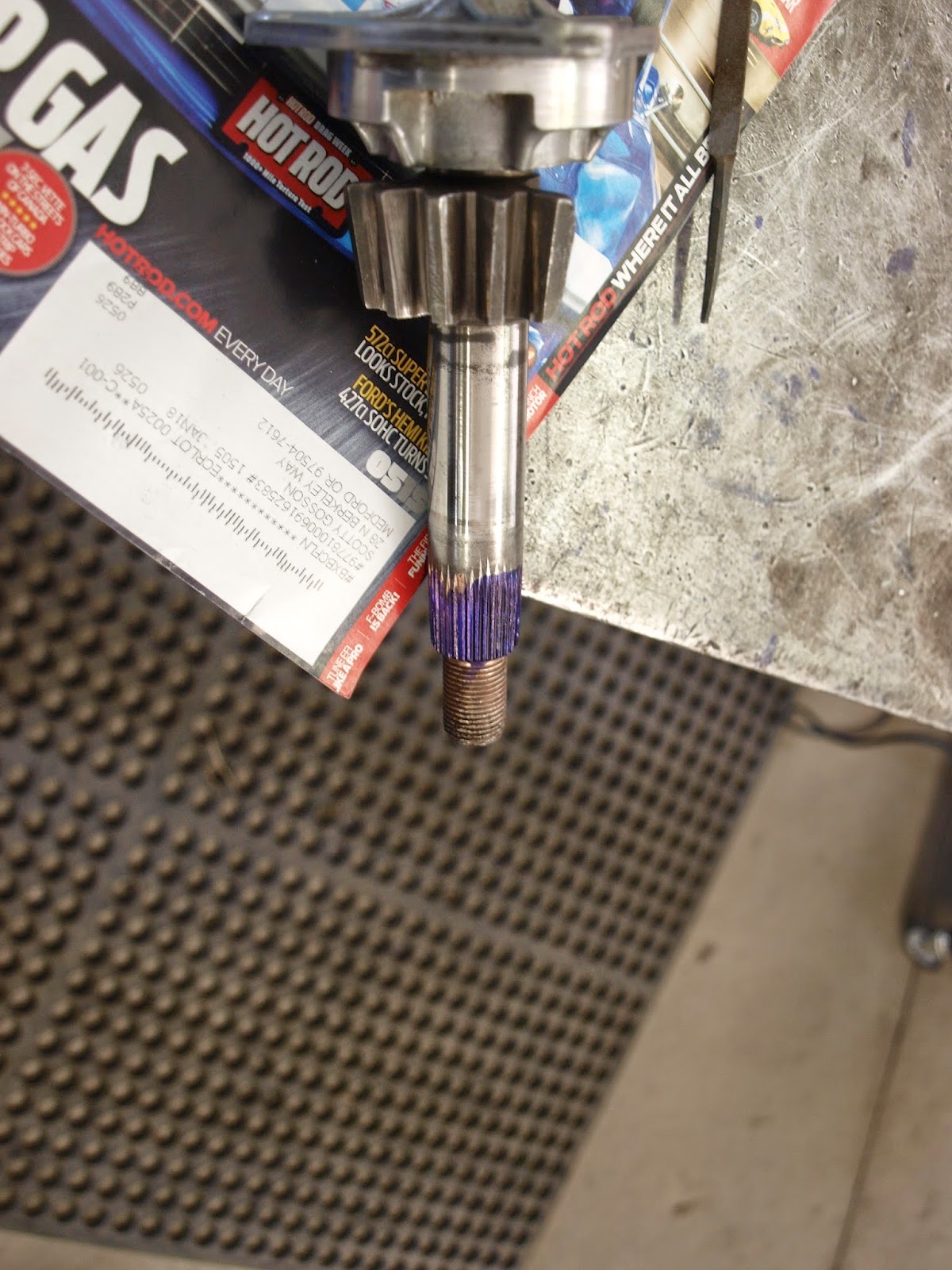 The new sector shaft, re-splined by hand and ready for installation. Special thanks to Doc for initiating proper spline placement for me. He has much better (and prettier) eyes than myself. 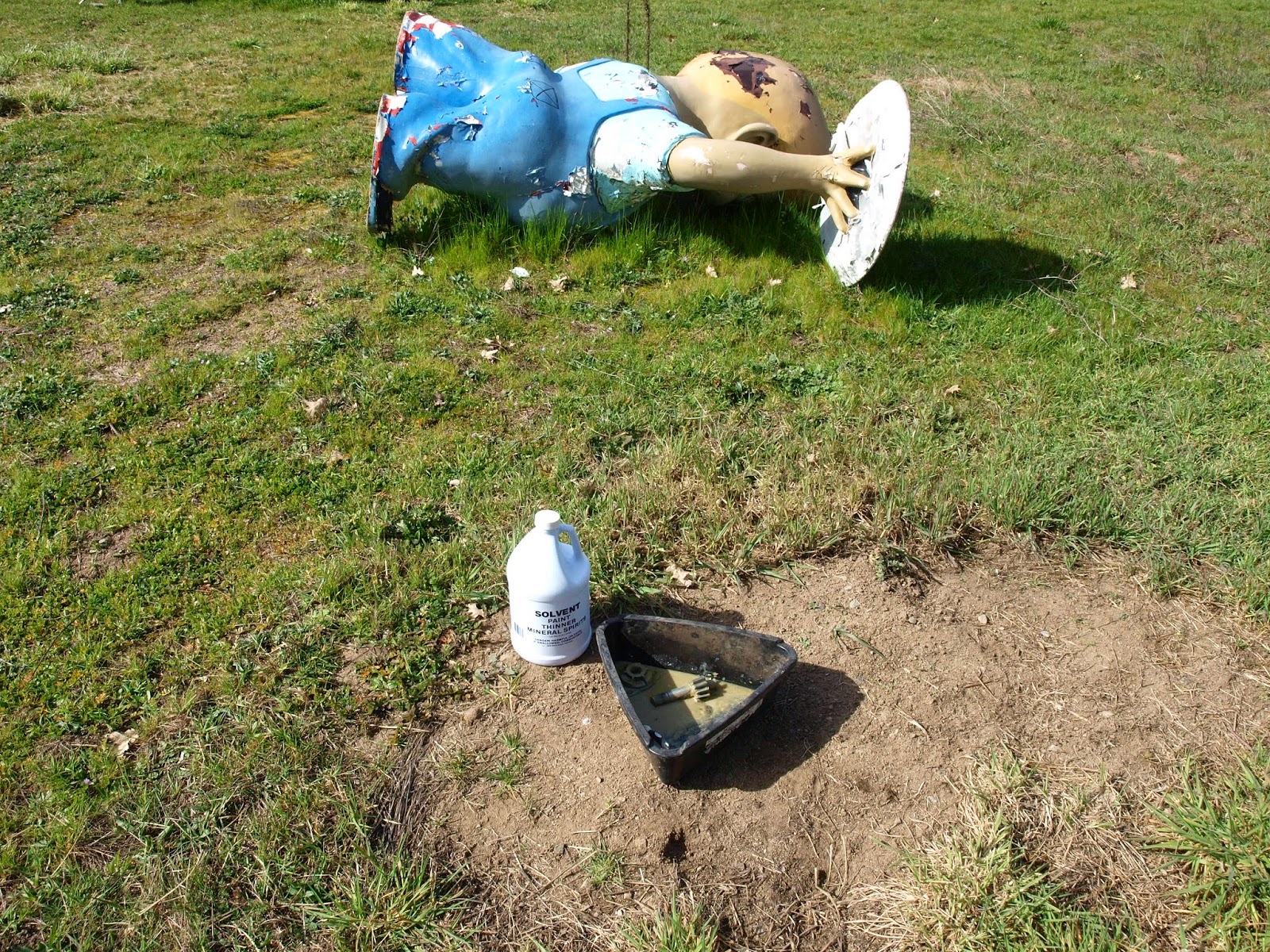 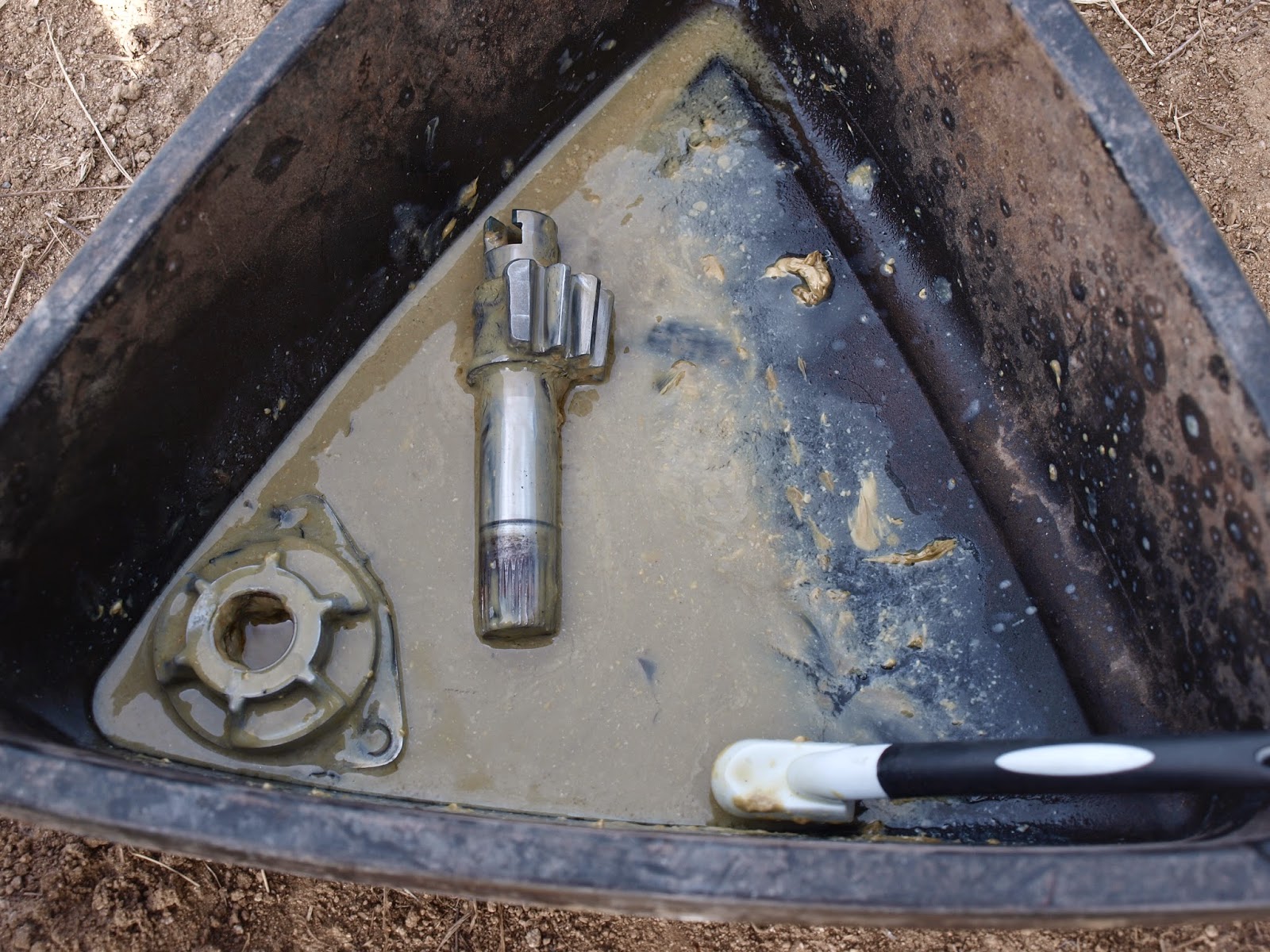 Personally, I like solvent. It makes my skin tingle. My brain, too. Luckily, it doesn'r afeck me a all. Mixed with synthetic grease, it looks like nitro oil. Neato! Once clean, we left the parts to dry (and Bob to sleep off his buzz) and went to lunch. 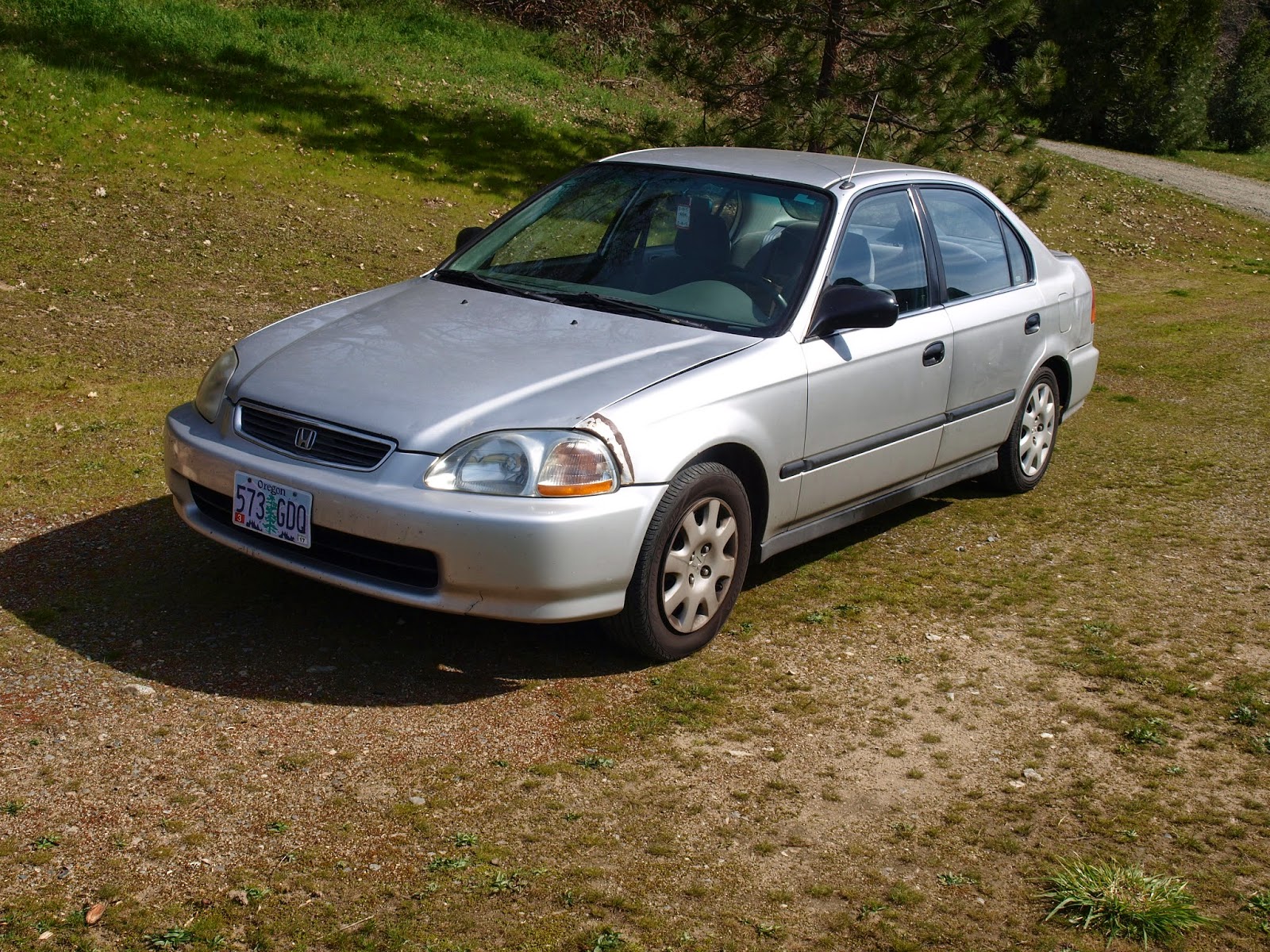 Employee parking at Custom metal. This Honda sleeper is the daily driver of  Yours Truly, general shop grunt and lead Test Dummy. 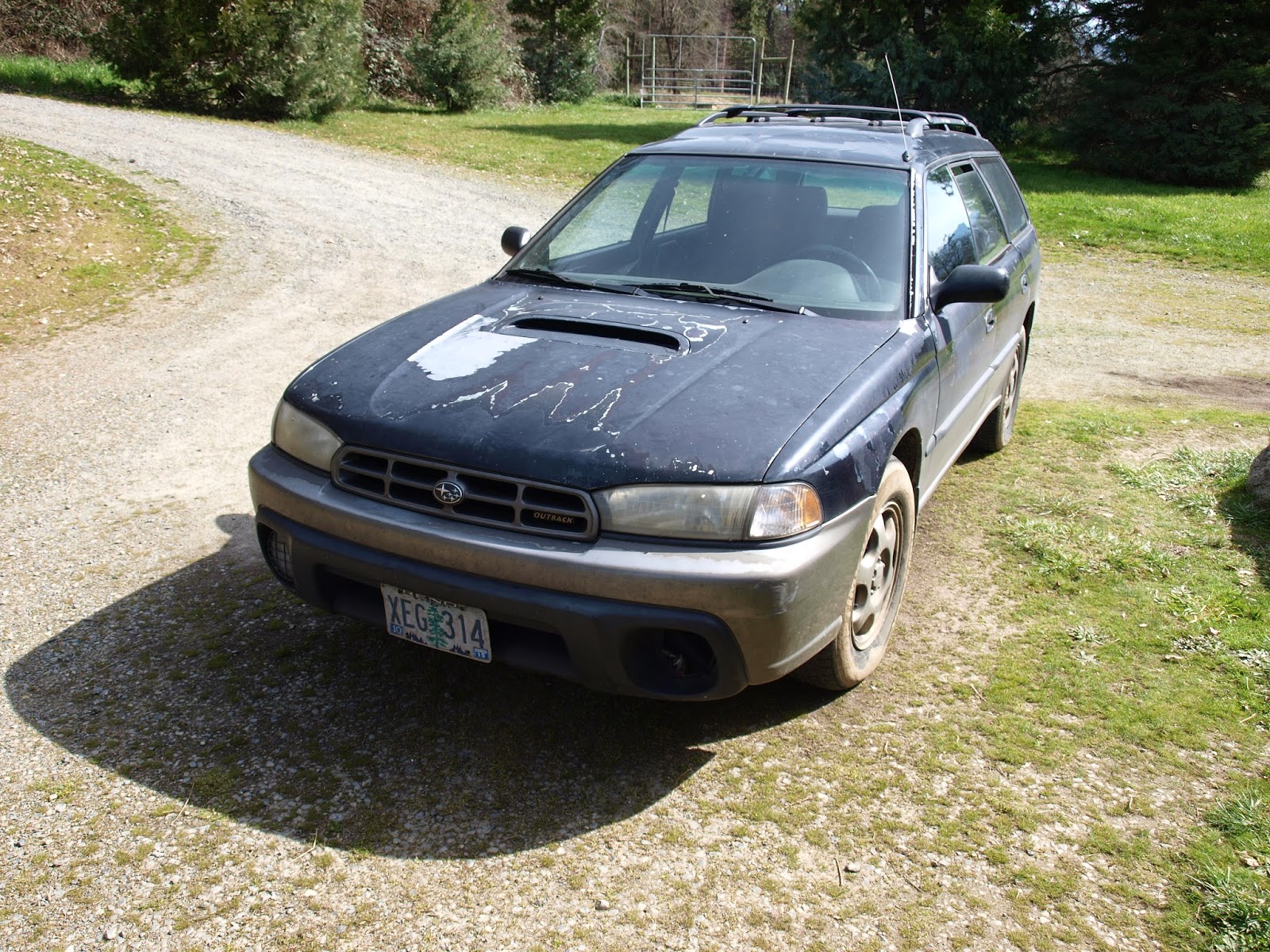 And this scabby Subaru is the daily driver of renowned custom paint guru Buffy, whom Doc and I have worked with at various Northwest shops. The Sub was loaded down with part of Buffy's amazing vintage guitar collection for our lunchtime entertainment. It was a long lunch break. 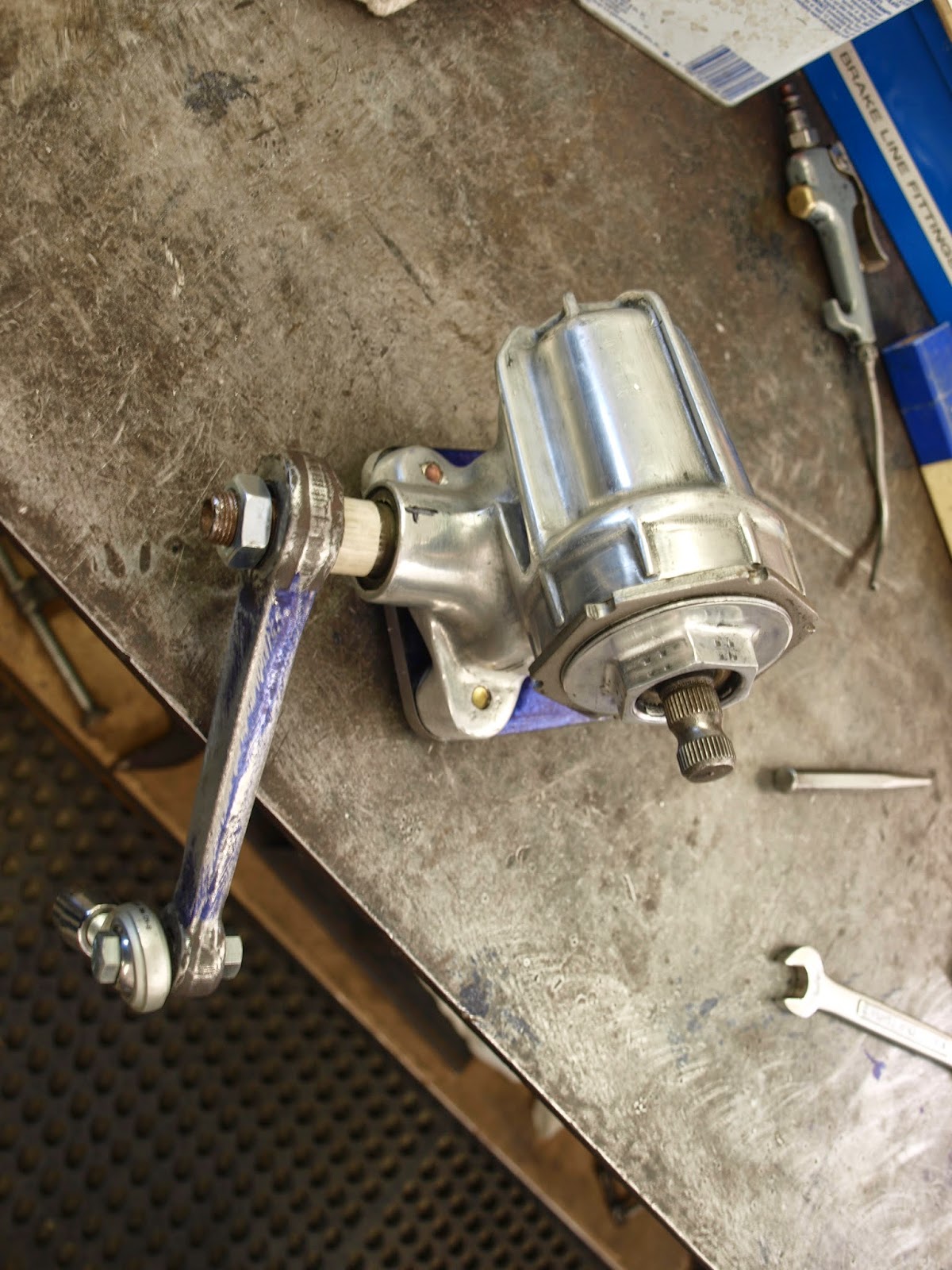 Following the lunch jam, we buttoned up the steering box, made a 1/4" steel mounting base for it, and finally got to the business of deciding its location in the car. This was a very complex procedure, with many opposing variables and limitations to consider. We ultimately settled on a mounting concept that will be a foreign challenge to both of us. Unless one of us gets a better idea by next Sunday. Wish us luck. (Scotty shots) 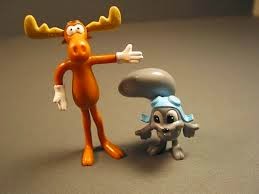 The most famous squirrel of all time, with his Moose sidekick. This bromance has touched the hearts of squirrel fans around the globe. but we only show them here to introduce a new squirrel in town. Ladies and gentlemen, cut and paste this URL into your browsers to meet the next flying squirrel superstar: https://www.facebook.com/video.php?v=754441204594841&set=vb.154691131236521&type=2&theater 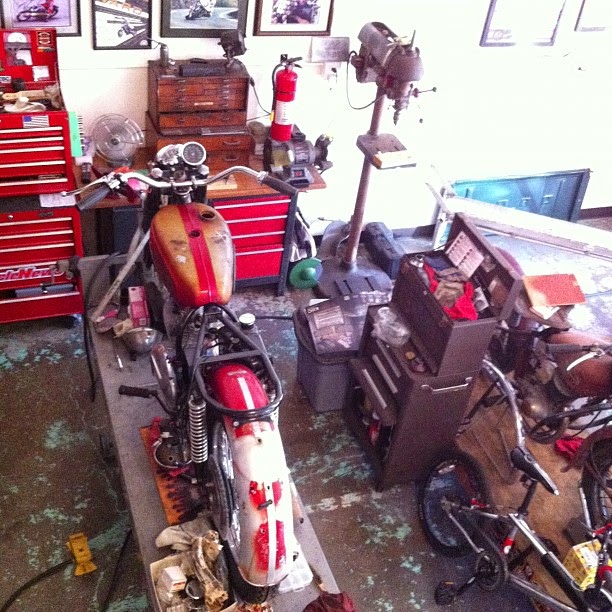 SGE pal Lori Bentley Law happens to be married to a guy who 'gets it'. Brian Law's work space is blessed with the two red rollaways and the Kennedy machinist chest at right. This one is personal to me, as I owned an identical Kennedy for many years and loved it deeply, but ultimately had to sell it. Check the handmade wooden boxes at front of motorcycle. We know Brian does some woodwork, but don't know that he built these beauties. (Photo courtesy of Brian Law) 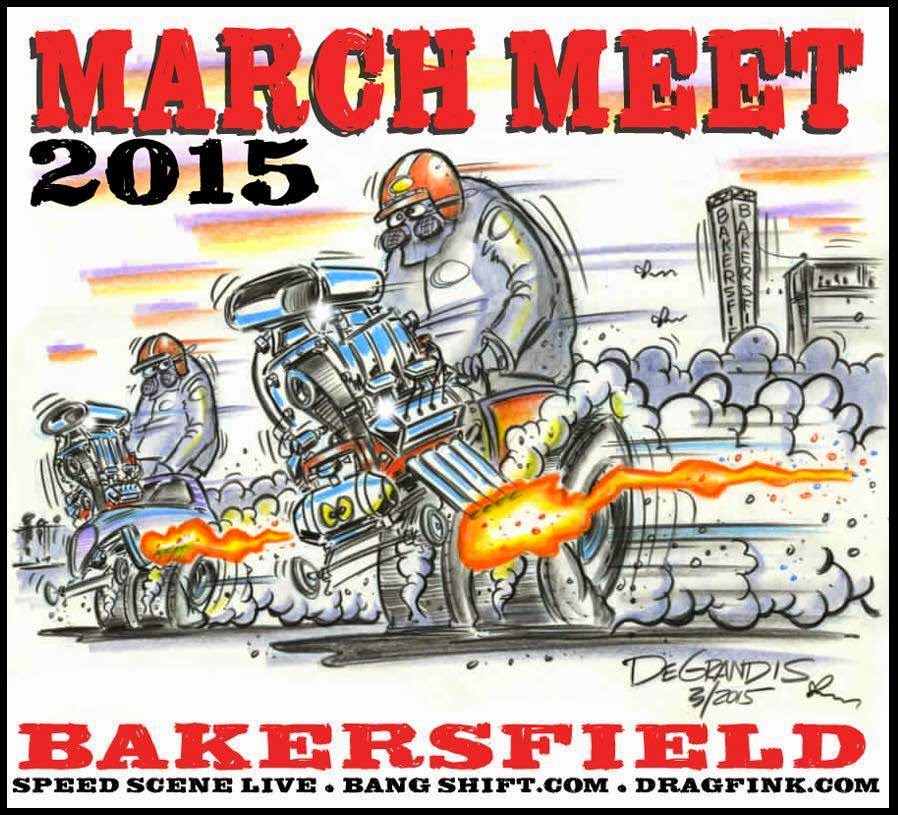 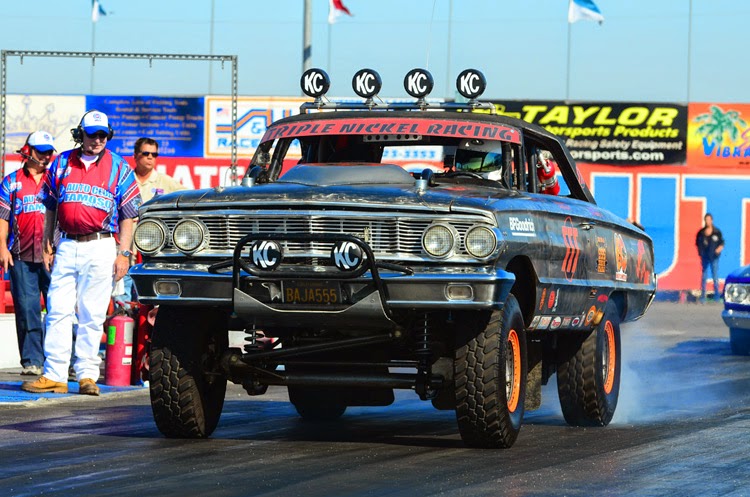 (Photo courtesy of Dragzine, NOT Roadkill)

Posted by Scotty Gosson at 1:06 AM No comments: