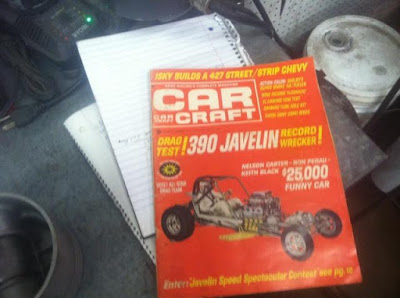 The June '68 issue of Car Craft magazine detailed ex-dirt track racer Byron Barnes' unorthodox approach to drag racing. Barnes just did what came naturally and built a sheetmetal 4-banger for his 750 pound dragster. Today, that CC issue serves as an appropriate coaster for a pretty cool paperweight: One of Barnes' home-cast pistons. 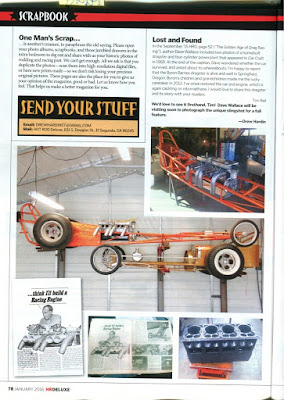 This teaser in the January '16 Hot Rod Deluxe "Lost and Found" column reveals a hint of the feature story to come. Last week, royal drag race scribe Dave Wallace seemingly astral projected from his secret California headquarters to the scene of the crime (in Springfield, Oregon) to get the hot skinny poop on the mini-digger that Byron Barnes bequeathed to Tim Riel in 2013. The following is Wallace's fully documented adventure. 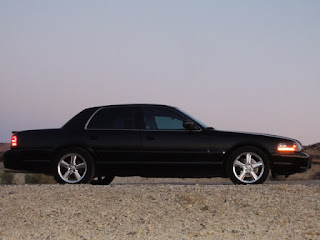 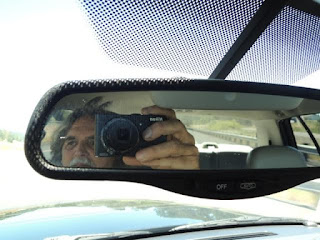 Wallace hightailed it north on I-5 in his one-off Mercury Marauder and didn't lift until Springfield. 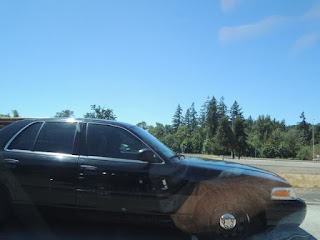 Okay, Wallace pedaled it once (to document his edge over this hapless CHP cruiser), then resumed speed. 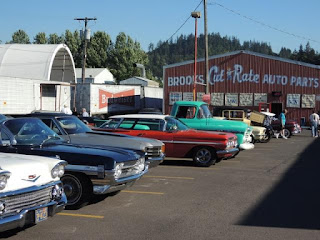 Part of the welcoming committee that greeted Wallace in Springfield. For a glimpse at why Wallace garners receptions like this, refer to the Dave Wallace SGE interview elsewhere on this blog. 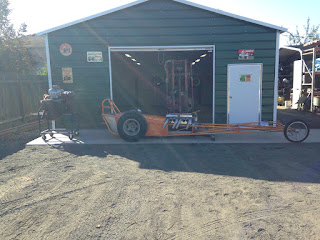 Finally engaging target: Tim Riel's shop, with the Barnesmobile front and center, ready for inspection. Worth every mile of the trip. 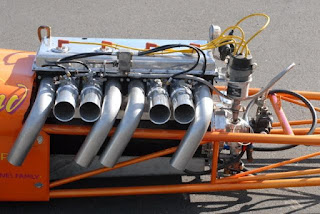 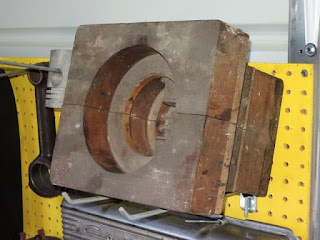 The four cylinders of nitro fury that drew Wallace in. We're sworn to secrecy, but can tell you the story will blow your mind. Hint: The above image is Barnes' handmade wooden mold for the one-off jumbo pistons (the specs of which are truly amazing). We suspect the piston and awesome connecting rod in background to be Barnes' handywork. 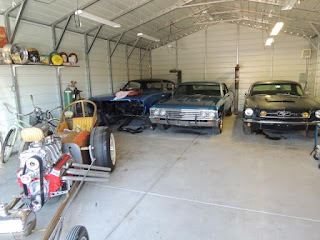 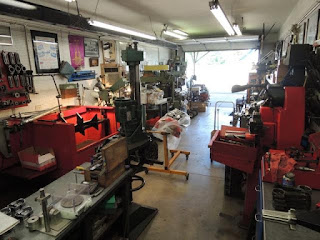 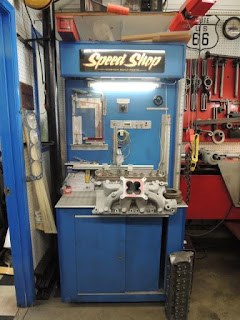 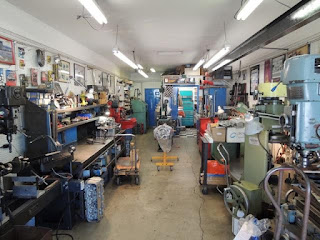 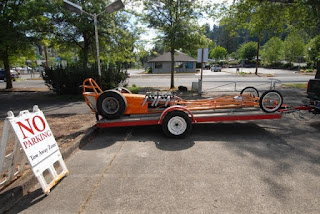 This vacant Chevy dealership served photo location duty admirably. A planned Golden Anniversary fire-up ceremony was scrapped when Barnes' son couldn't attend, and the oil system was out of service. Wallace soldiered on regardless and enjoyed a successful shoot. We've never hyped an upcoming magazine feature before, but this one will be special. Don't miss it. (Photos courtesy Dave Wallace) 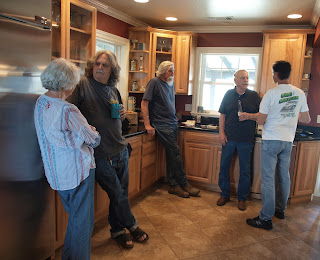 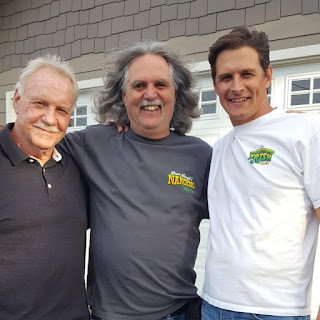 Brown and Wallace go way back, but hadn't seen each other in 35 years. This was the warmest fuzzy of the night. Mankins photobombs the moment, as wife Kelley hammers the shutter. (Photo courtesy Kelley Mankins) 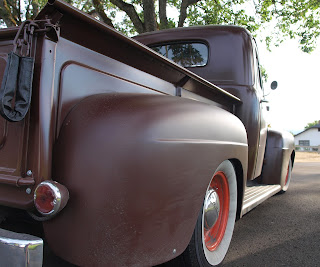 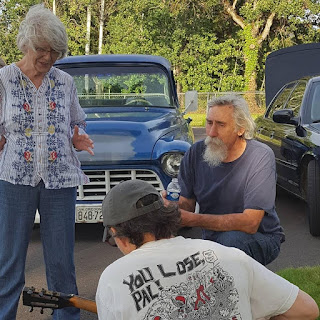 Though we've been friends for years, I guess I forgot to tell Donna that I'm a musician. She reacts here, as Doc allows me to drool on his 1926 National guitar. That's Mankins' daily driven BBC '55 Chevy truck in the background, next to Wallace's bug-splattered Marauder. (Photo courtesy Ronnie Mankins) 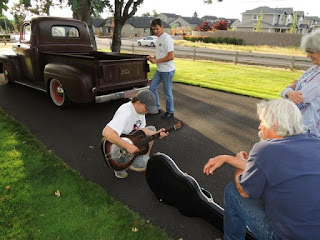 The impromptu concert was short and sweet. Then we ambled over to Mankins' garage and proceeded to jangle the night away. The cops never came. It was a good night. (Photo courtesy Dave Wallace) 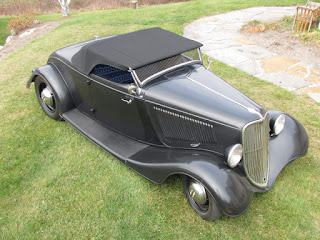 SGE Northeast correspondents The Jumpstart Kids (Lance and Diane Sorchik) have been putting some break-in miles on their '33 roadster (build photos are scattered throughout this blog). The well planned build has presented very few bugs to exterminate. The Joisey Hairblower recently appeared at the York, Pa. run, and the next scheduled stop is Rhinebeck, in upstate New York. Our congrats to all involved, and a hearty Well Done! 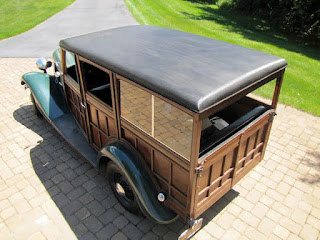 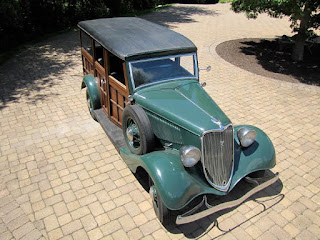 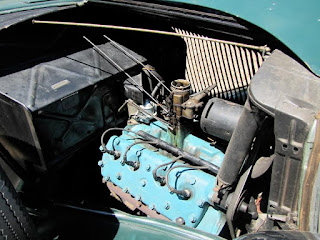 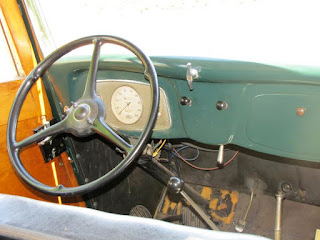 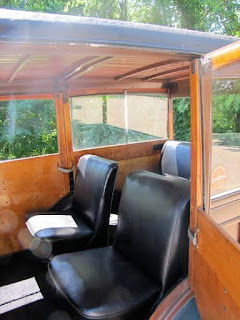 Recently in their extensive travels, the Sorchiks procured this '33 longroof - gennie, but for a '37 V-8. The previous owner (in rust-free California) bought it in 1962. Sorchik tells me Ford produced 1,654 of these wagons, but fewer than 50 examples remain today. Bonus: It seats seven. Road trip! Lance and Diane are undecided on whether to Whip or Flip the funbox, but have okay'd publication of their phone number for interested parties. Please call and tell them not to sell! That number again: 973-875-9046. (Photos courtesy Jumpstart Kids) 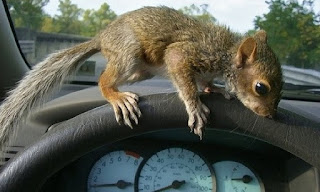 The new steering wheel covers are now in stock at Pep Boys! Get yours today, at 15% off! Best part: Giving it a clever-ironic name - fun! I named mine Wallace. Nevermind that I call everyone Wallace. 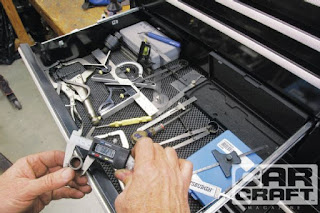 We've run Jeff Smith's Craftsman rollaway in this section before, but couldn't resist revisiting it in this week's salute to veteran photojournalists. Plus it's another excuse to thank Smith for helping me get my foot in the door of the magazine biz. Thanks, Jeff! Smith has been through it all in our little microcosm, and has survived to become an elder statesman. Me, not so much. So Jeff continues to inspire... (Photo courtesy Car Craft) 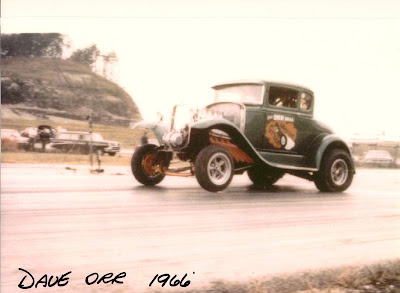 Since we're spamming magazine ink: A Scotty feature on the Orr family's "Green Weenie" Model A will run in the next issue of Hot Rod Deluxe. BE THERE!!! (Photo courtesy Dave Orr)