DOUBLE HEADER: MY ROYAL SUBJECTS and DISPENSING THE BLUES WITH SLEEPYTIME FAIRMONT 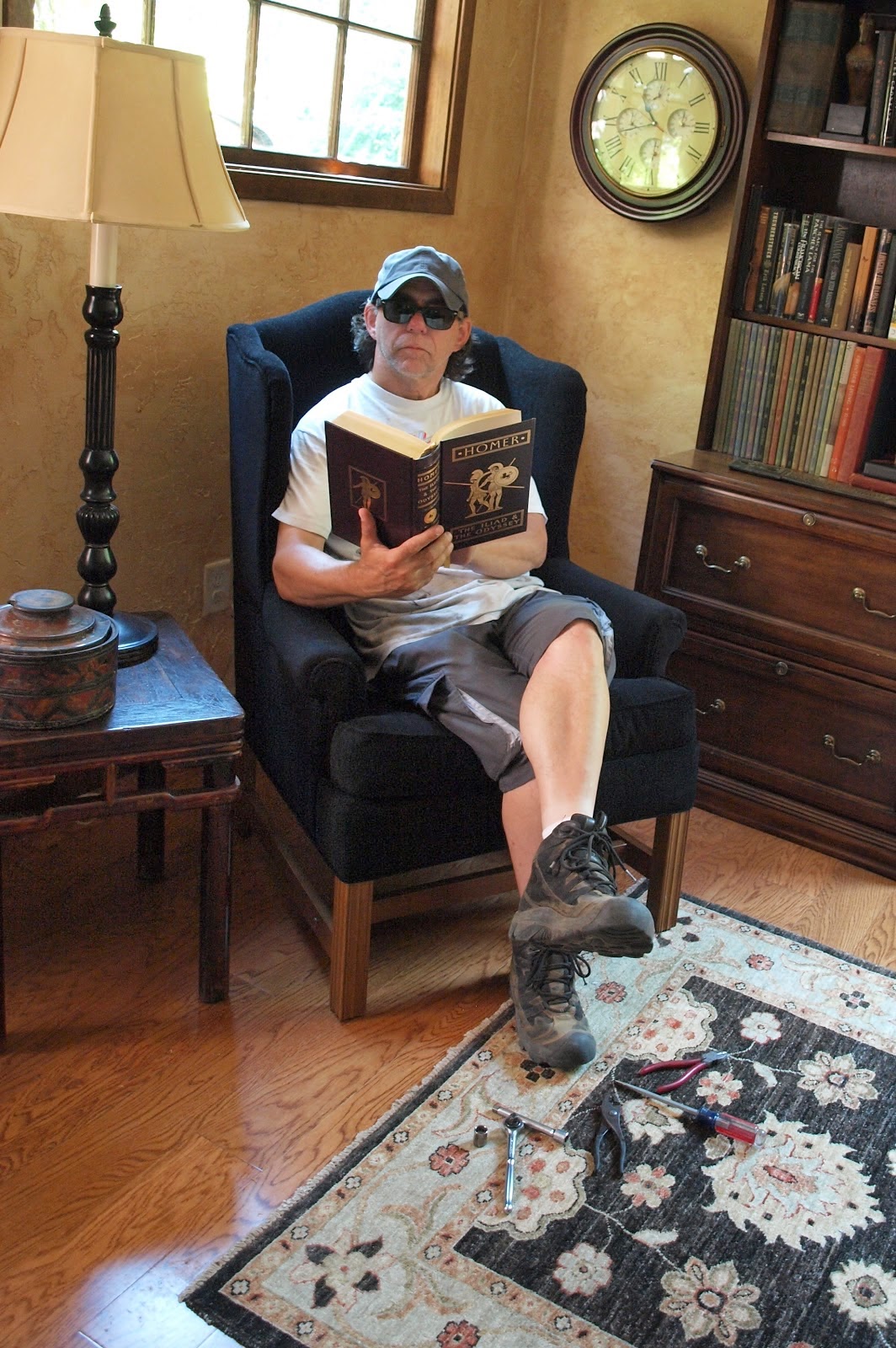 "The Author at Home", photographed by Saint Shellski in the reading room at the Sandra Bjerke Museum of Intercultural Relations in Medford, Oregon, 2012.  The museum was actually my home at the time. I was the caretaker.

The transition from Freelance Magazine Contributor to Contracted Book Author was a very surreal twist in an already well-pretzeled journey. The back story is a classic leap-of-faith adventure, more akin to a Hunter S. Thompson plot device out-take than the standard literary study scenario. The ensuing chain of events grabbed me by the nose hairs and dragged me through my own past to reconnect with characters first established in my lifeline decades before. Lance Sorchik, the late Just Steve Hendrickson, and Gerry Burger reappeared from the back pages of Rodders Digest magazine to kick my ass into authorship before I had a chance to question the proceedings.

Three weeks after signing with the publisher, I was slugging coffee at the Las Vegas Convention Center with my CarTech Editor, the mile-a-minute Scott Parkhurst. Talk about surreal. The day before flying out to Vegas, I was covered in mouse turds and rust dust, while stripping the interior from a '53 Chevy "Tin Woody" (in preparation for welding in a subframe) at my fab-grunt day job. Suddenly, I'm jawing with P-Hurst about possible book format structures, while my hot rod heroes strolled past the Cartech booth. I had lunch with Mario Andretti; digested it on a park bench while being serenaded with true tales of hot rod pioneers by bench-mate Alex Xydias; traded print barbs with Kirk Jones; and heard a million first-person accounts of drag race history from Dave Wallace Jr. That was the first day. The week ended at Silver Mountain Raceway, where Optima Jim, Kristin Cline, and a dozen other new friends and myself tortured a fleet of Lotus race cars around the road course until we wore ourselves out and capped the proceedings with an exquisite Italian feast.

The next day, I returned to reality for eight hours of grinding welds, then faced off with a blank computer monitor, balking at starting my first book project. Once I laid out the basic parameters and established some momentum, the crucial human element quickly crept in. The subjects of my writing had carried me through many a magazine feature challenge with their delight at being chosen. The joy I experienced in being trusted with their stories is a gift I cannot relay in words. But now it was different. My subject's reactions went from giddy to shock.

From where I sit, a book is just a longer magazine feature. It's wonderful to go more in depth and get more creative, but my job is pretty similar, no matter the format. So it caught me off guard when my potential subjects (who had responded to my magazine feature inquiries with equal parts jubilation and swagger) now met my approach with the still silence of a deer in the headlights. Crickets... I interrupted the vacuum with a follow-up question, like, "Is this a bad time for you?" More silence. Then, "You want ME (or 'MY CAR') in a BOOK?"
It's like they were questioning their worthiness. Like a book is a more serious document of history than an impulse-buy magazine off the rack. Because it costs more money and comes from a snooty bookstore, rather than a convenient store reeking of fluorescent-lit reality? I don't know. But once some momentum was established on the project, all was routine. Go figure. 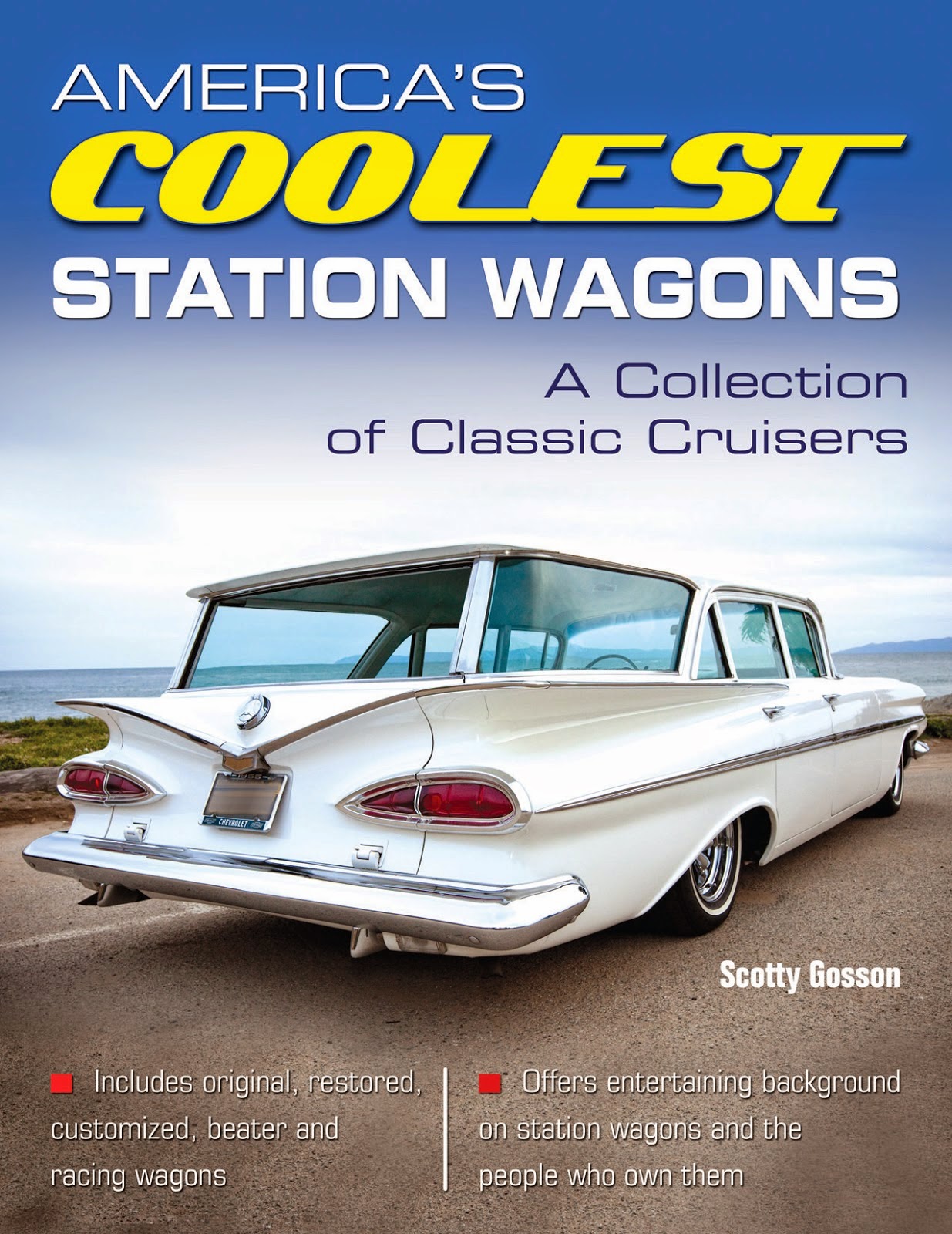 Being a station wagon guy, this was a natural freshman project for me. Being citizens of a minuscule sub-niche in the hot rod microcosm, the wagon owners I approached were happily gobsmacked. Each feature felt like I was inducting Rodney Dangerfield into the Hall of Fame. Very gratifying, for all parties involved. 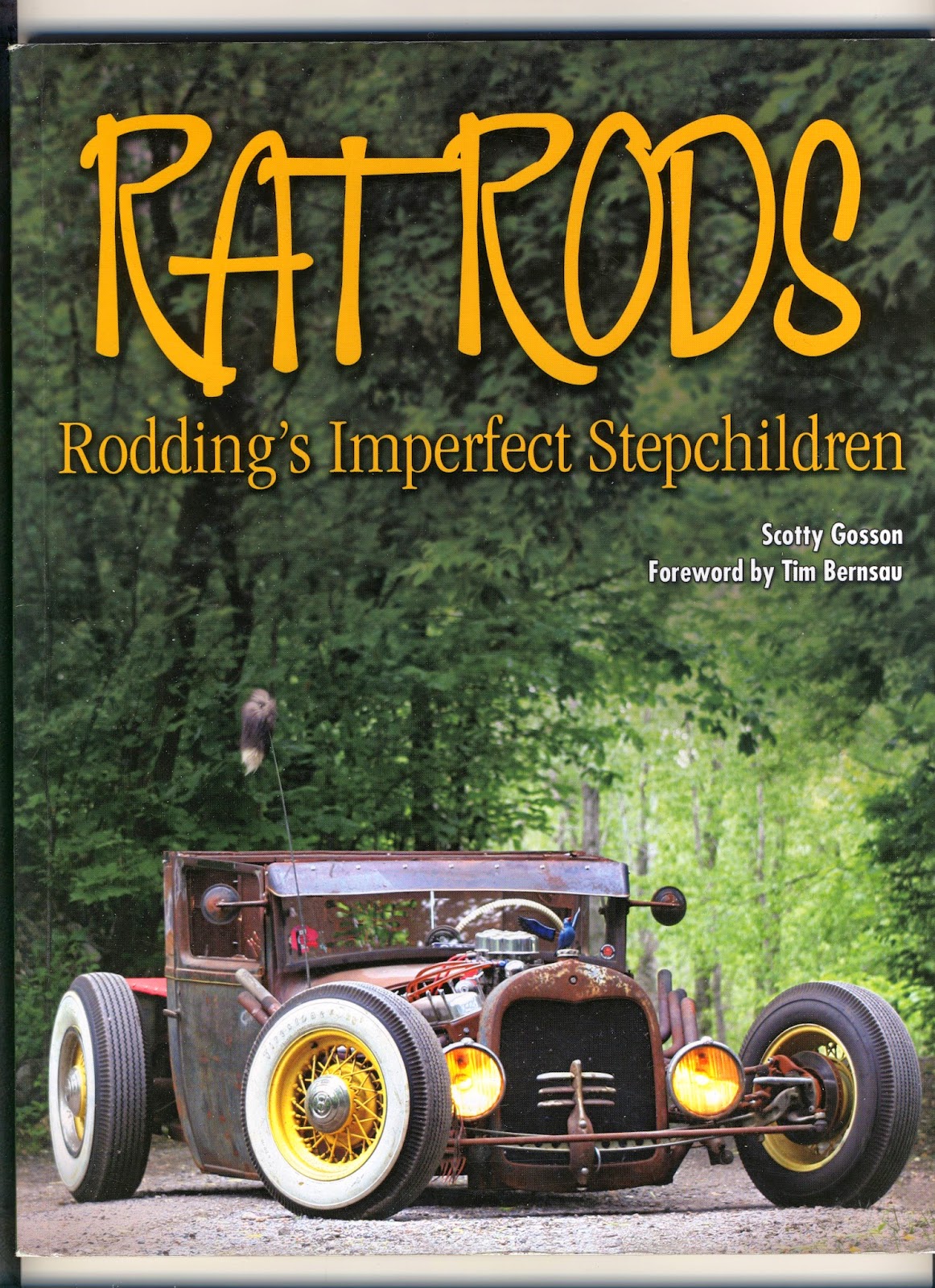 Talk about no respect. This one taught me some ugly and valuable truths about myself. I had pre-judged the rats, then realized I was virtually one myself. The result was a humbling education for me, and absolute validation for the rats. 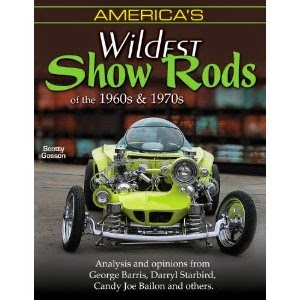 This was a striking change of scenery, from a couple of angles. As a grassroots-level high performance enthusiast, show rods had always served as mere background eye candy to me. Face-to-face with them, I fell hard for the combination of humor and creative craftsmanship. Another baby step toward awareness. But now I was dealing mostly with professionals instead of blue collar hobbyists. Most of these people were funsters at heart, but the book dealings were strictly business. No awe shucks posturing here. 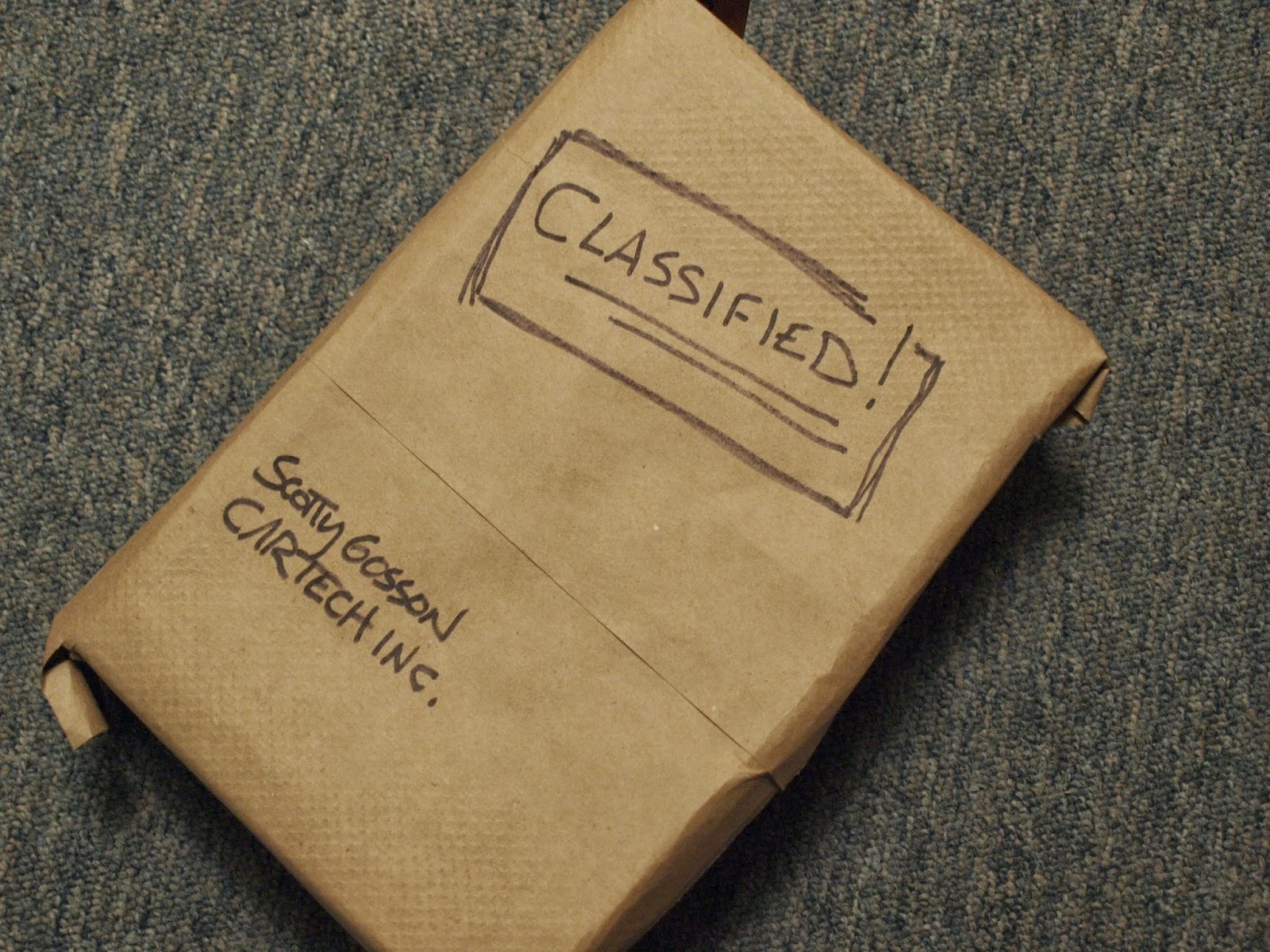 Today, I'm less than three weeks from the final deadline for the latest top secret CarTech book. There's still about three months worth of work to do in that time. I have no idea of how that happens, but this is the fourth time in a row. I can tell you this: The subjects of this niche-within-a-niche-within-a-niche project are ecstatic to be involved, so I invited them to assist, which they are eagerly doing. So I now have a temporary staff of bona fide experts working for me and am officially spoiled beyond salvation. Today, I am a princess poodle. Next month, it's back to being a junkyard dog. 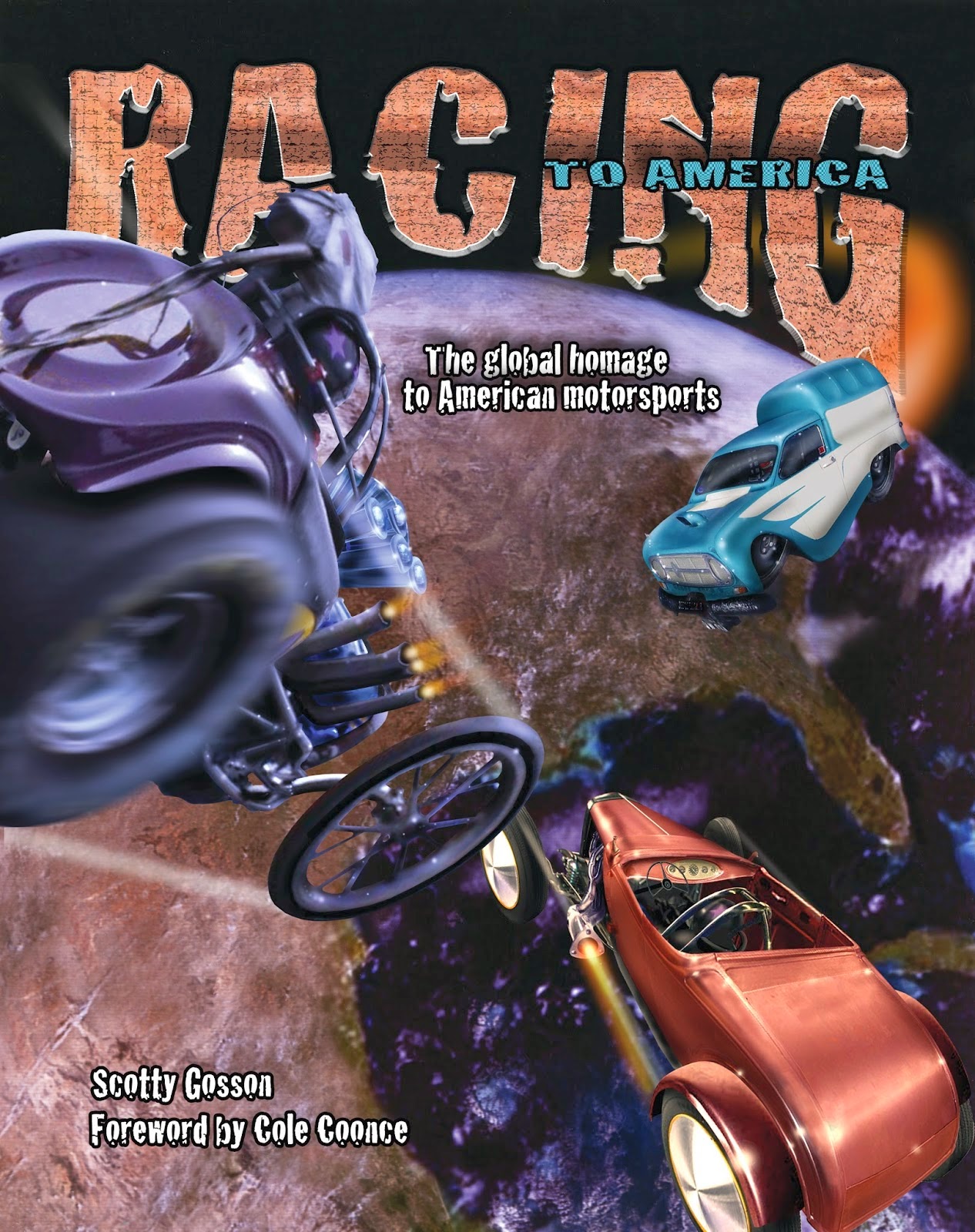 This spare time project covered the spectrum from corporate funded professional race teams to a race car built by working stiffs in a side street shack, from wrecking yard parts. My subjects came from every walk of life, from every point of the globe, and every point of view. Very exotic to this small town hot rodder. Another beautiful lesson in cultural exchange.

The best part of my job is becoming friends with my subjects. From the most obscure to the most famous, I searched them out because I was drawn to them. To call such people my friends now is the greatest gift, no matter how we connected. I remain the grateful Forrest Gump of hot rodding. The luckiest guy in town.

The above Cartech books are available at most retailers. View the entire CarTech library at www.cartechbooks.com. Racing to America is the first release from the Gosson Bros. Racing Library. Available at https://www.createspace.com/4338903 and/or  http://www.amazon.com/Racing-America-Global.../dp/1490539778 . 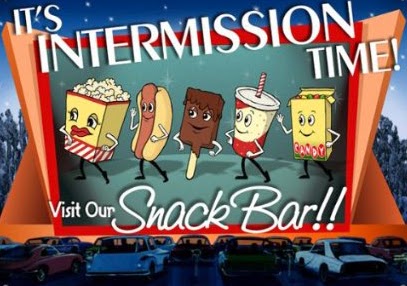 DISPENSING THE BLUES WITH SLEEPYTIME FAIRMONT 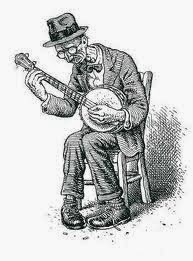 This is not Sleepy Time Fairmont. This is a self portrait by bluesman and artist Robert Crumb. Fooled you! That's pretty much the point of this tune.


The first time I heard Sleepytime Fairmont play the blues, I nearly passed out. It wasn't the exhaust fume breath or grinding breaks that threw me, as much as the truthful force pushing me back into my seat. I thought I was going to tip over. Sleepytime Fairmont is a veteran bluesmaster of a different kind. It's Matt Happel's four-door Ford Fairmont sedan, designed from the get-go to give goldchainers a serious dose of the blues. The really down and dirty kind of blues, that make you wish you'd never been given a drivers license. 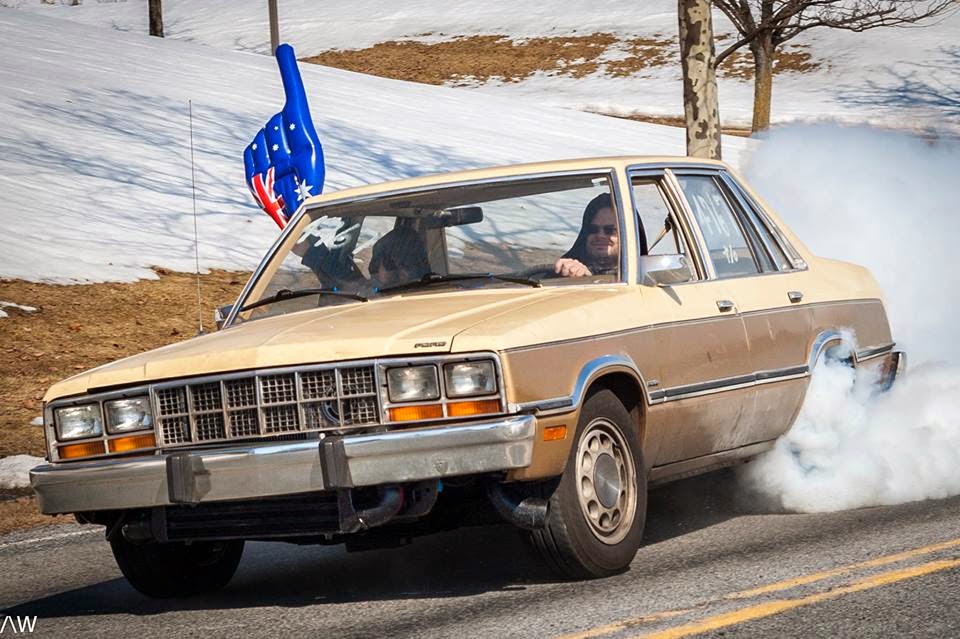 Happel and friend, running some quick errands in the Fairmont. It's invisible to mortals.

Matt Happel has his act down. He's been converting junkyard cadavers into street sleepers for a few years now, with a focus on Ford's humble Fairmont model. Sleepytime Fairmont is just my private pet name for Happel's latest. I can't help but look up to people who do what I can't, and Happel falls right into that category. A lifelong sleeper fan, I haven't yet found the discipline required to build one. But as I age, my ego is slowly shriveling, so there's hope for the future. I've had a secret sleeper build in my head for thirty-plus years, so was naturally attracted to Happel's approach when I saw it on Dragzine.com recently. I'll share the highlights with you here, but go to www.dragzine.com for the extended play version. You'll like it. 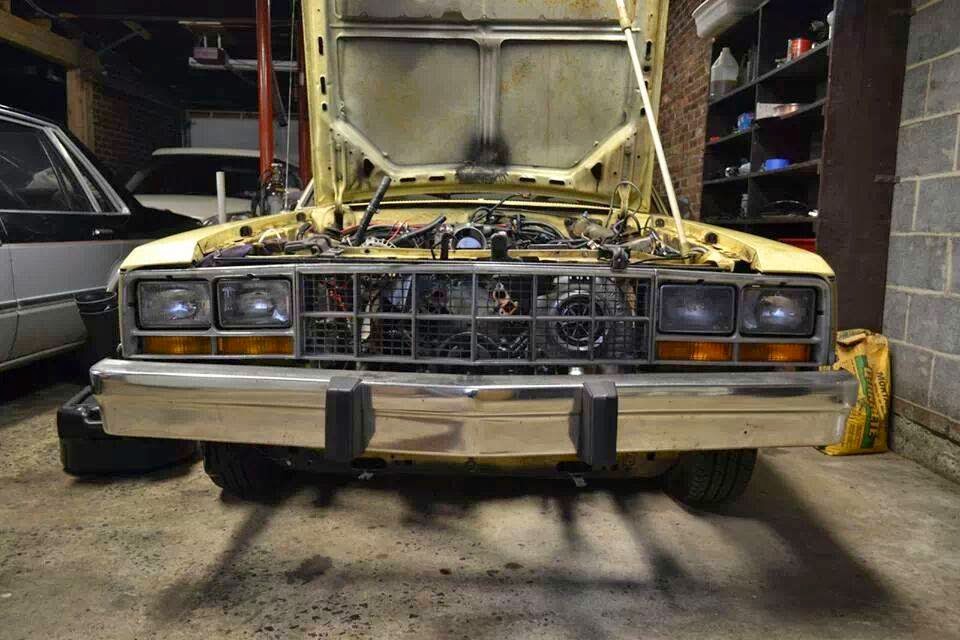 Matt lives in Pennsylvania, which doesn't quite explain his penchant for Ford's Fox body platform. What's the attraction, Matt? "I was never a big fan of the Mustang, and because the Fairmont shares a lot of the same parts and such, I just always end up building Fairmonts." Fair enough, sir. These backdoor orphans are easy to find for couch cushion change. 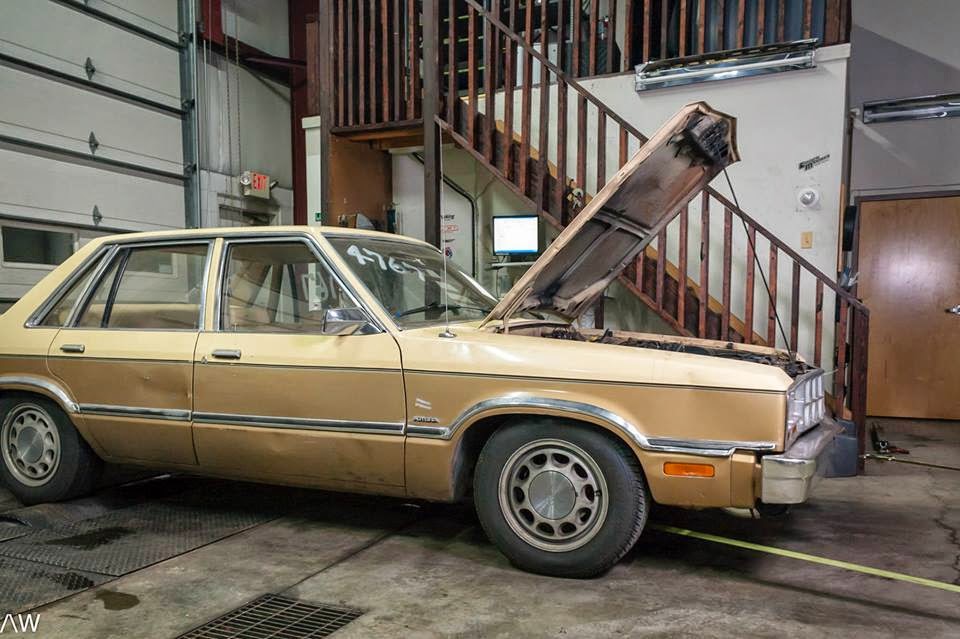 This particular example was a Craigslist find, offered up by a college student ill-equipped to deal with the straight six' head gasket issues. 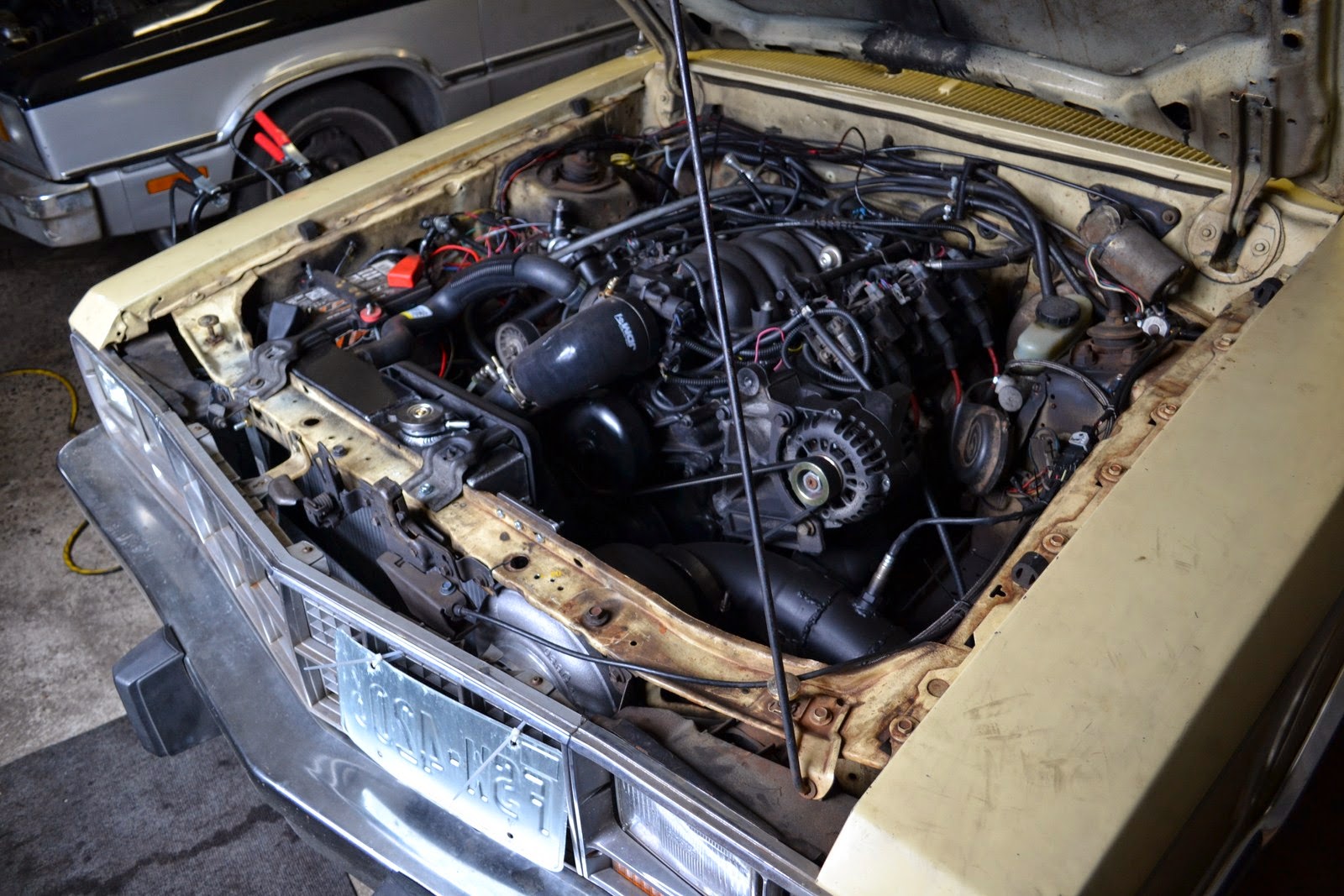 Thanks to his hard earned wrecking yard connections, Happel was able to score this 5.3 liter LS and a 4L80E transmission from a 270,000 mile Silverado truck. The stock Fairmont 7.5 inch rear was swapped for a 8.8 incher, and the drivetrain was complete. A used LS1 intake with 80 psi injectors was force-fed by a 76mm turbo and the deal was done. 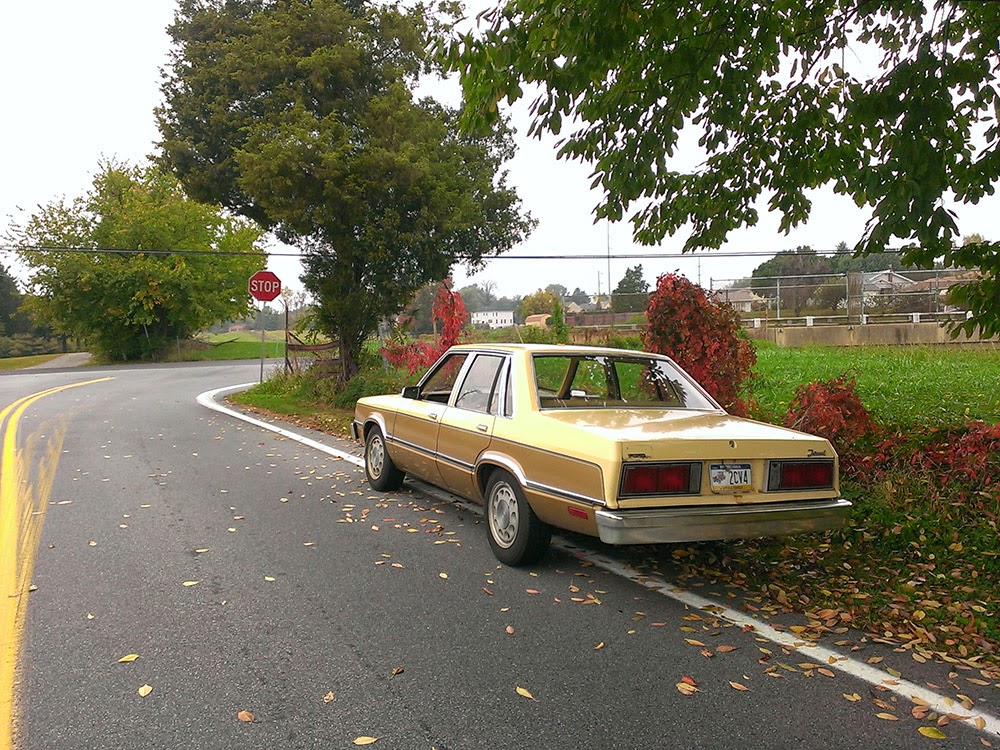 Beefy rubber on factory aluminum wheels are the only external visual hint of the evil within. Matt's little plan was working perfectly... 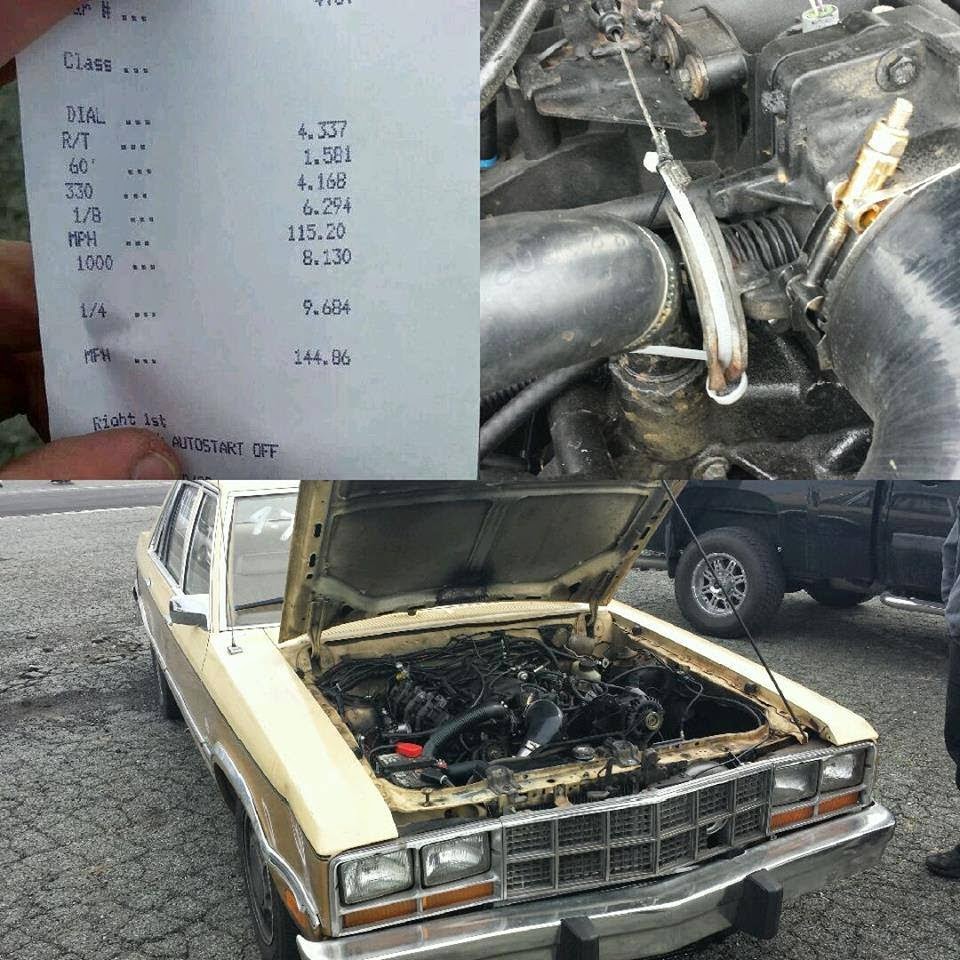 Happel scored a pair of used 235 drag radials for $26 and added another drag strip to the list of establishments he's been excused from. "When they asked me in tech how quick it was, I said, 'I'm not sure, but I know it'll be faster than your safety regulations allow.' I don't have a cage or anything." The ET slip tells the tale. Dragzine.com has details of the build. And Happel has a winning approach, placing yucks over bucks on the priority list. This is big time hot rodding for Joe Toolbox. And these are the best of times for junkyard zombies. (Photos courtesy of Dragzine.com) 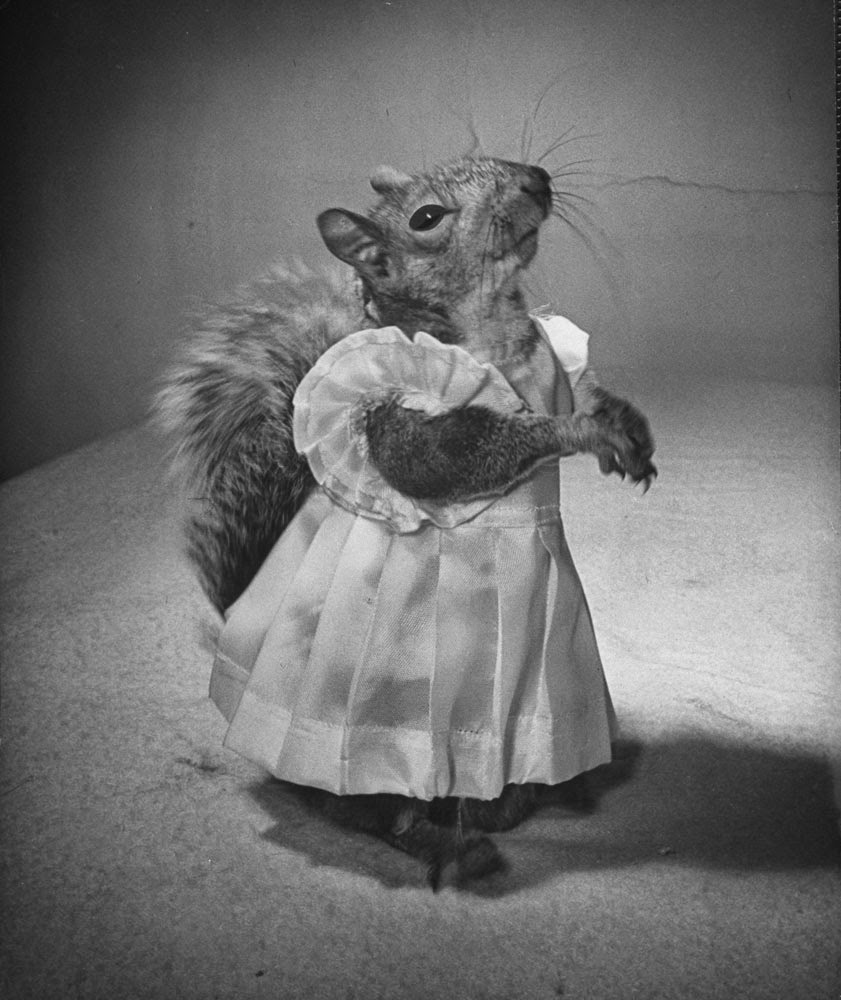 We all read Anedia Martinsons' writings in high school (her Collected Poems of the Northwest Woods Creatures snagged a 1937 Pulitzer Prize, and was required reading in my sophomore English class), but did you know that Anedia was an early proponent of hot rodding, with a particular focus on supercharging? Her pioneering efforts (with an assist from Ed Almquist) in the field of high helix rotor design dramatically sped up the horsepower evolution. Martinson was also a respected cabaret singer, known in the Hoboken, New Jersey area as The Singing Bush (for her strikingly beautiful tail). Frank Sinatra often cited her influence on his vocal stylings. Alas, Anedia Martinson was snared in a hunter's trap in 1952. She would have been 97 years old, this Thursday. 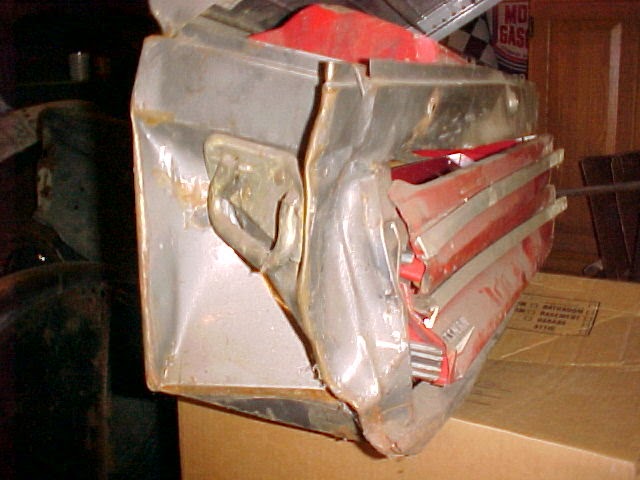 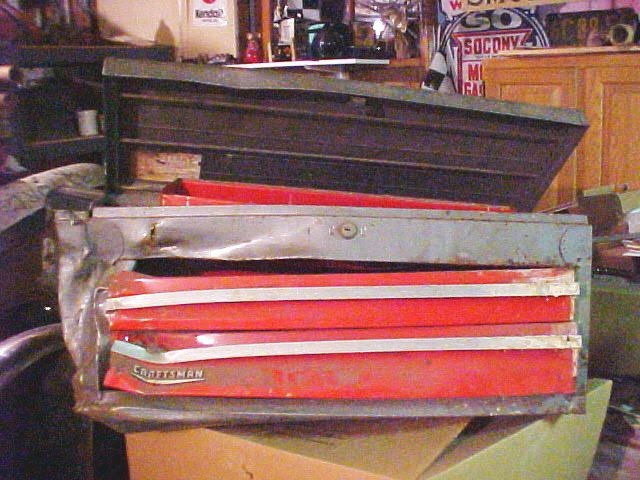 The result of an oil burner explosion, The 37 Kid's Craftsman tote-along box may now be considered a radical custom. At press time, Kid is undecided on undertaking a complete restoration, a triage-style repair, or submitting the box for consideration as an entry in an upcoming industrial exposition at the Museum of Modern Art. Stay tuned. (Photo courtesy of The 37 Kid)

NEXT WEEK: It's 50/50. If I survive another week of deadline fever, I might write something. If not, just know that I appreciate you reading the blog, and that I'm grateful to have enjoyed a good run. Tell the world I was killed by a bear.