From the Midnight Oil File:

This stuff no longer surprises me, yet never ceases to amaze me. In the course of researching for a recent book project, I stumbled across an iconic car that’s been missing for four decades, along with its builder, who’s been presumed dead during the same period of time.

It was late at night and I was weary. On page 12 of a Google search, a website popped up in his name. I reacted with a sad resignation of the parasites weak and bold enough to live off someone else’s legacy. Depressed, I shut down the computer and went to bed. It was 1:45 AM. At 3:00 AM, I got up and clicked on the website’s “contact” button. I sent a message, inquiring if perhaps they knew of any actual family members of the hot rod hero they were exploiting who might be of help with my research. To my astonishment, I received an instant reply, stating that it was indeed the hero in question, and he was feeling chatty. After a few cautious hours on the phone and a few dozen revealing e-mails, I was 99% convinced it was really him. And I had an ace-in-the-hole deal clincher in the wings: My boss at Hot Rod Deluxe, Dave Wallace, who had once worked with many of the same people where Mr. Hero had made his name. Wallace grilled him over the phone and confirmed he was the real deal. Despite the warnings of some acknowledged experts, I took the leap of faith and dove in. It turns out that this legend and I have enough in common to base a friendship on.

Steve Scott was a fairly typical 1963 hot rod teenager, until he built the Uncertain-T and set the custom car world on its ear. Due to the feverish media crush around the Roth-meets-Dali styled car, Steve soon found himself on the payroll at Petersen Publishing Company – perfectly postured to promote the car to even greater fame. The ensuing ego party was rich and sweet, until it wasn’t anymore – 1967. That’s when Steve Scott vanished from sight, along with the Uncertain T. Rather than relay his twisty story to you here, I’ll refer you to Steve’s Facebook page, where he’s revealing answers to the questions thousands have been asking for decades. Meanwhile, Steve is building a website dedicated to the Uncertain- T, among many other projects (www.SteveScottsUncertainT.com). Yes, he’d be a natural for an SGE Interview, and that may happen, but for today, I sense that he has many other priorities. However, I can say with Certain-T that this needle-in-a-haystack story is the stuff of journalistic dreams and I count myself blessed to have realized yet another one. Again, I’m the luckiest guy in town… 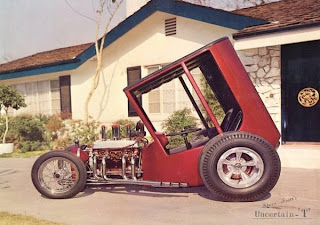 Did you know Steve Scott took all of his own photos (often employing a timer to place himself in the shots)? He is currently searching for many images that mysteriously disappeared from storage at his mother’s home in North Hollywood, California while he was serving his country. Please contact Steve if you come across any of these bootlegs. 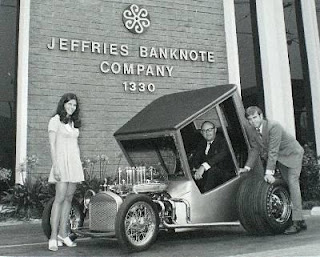 I can’t wait to hear the story behind this intriguing image. That’s mid-sixties Steve, leaning on the tire. 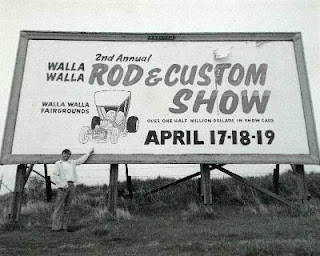 Steve tells me he often passed through my area while road-tripping to shows around the country, as this billboard outside of Walla Walla, Washington attests. 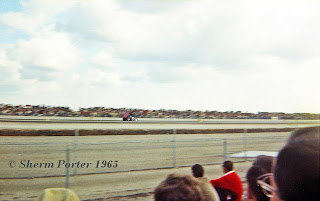 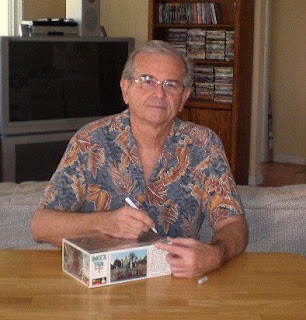 Modern-day Steve, in his secret lair, where he’s finally savoring the success that drove him away so long ago. If only I had a modern-day photo of the Uncertain-T to go with this shot. Hopefully soon…

From behind the Behind the Scenes File:

A recent Behind the Scenes post eluded to a photo shoot with House of Mouse staff pilot Eily Stafford at October’s NHRA Hot Rod Reunion. I was initially disappointed when none of those images appeared in the March 2013 Hot Rod Deluxe event coverage. Then I discovered Paul Sadler’s uber-cool two-page “Invisible Man” photo of Eily in action on pages 10 & 11. Wow! Now I get it. And now I can share a tease of said photo shoot with you. I have the goods for a decent feature story on Eily and the Strange Brew crew, if desired (Editors, I know you guys are reading this). 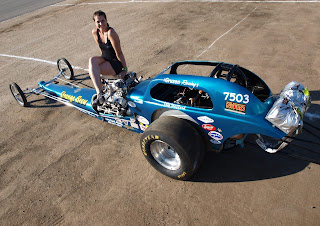 This pose was Eily’s idea and I made no attempt to stop her. This could almost be an HRD cover shot. Maybe some day. 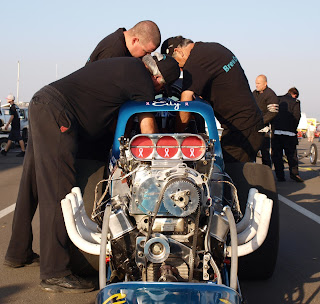 This has been posted here before, but I couldn’t resist an encore. 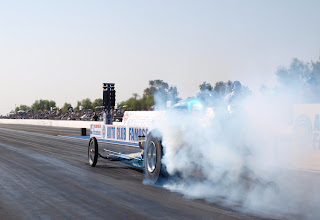 Eily warming up in the bull pin. 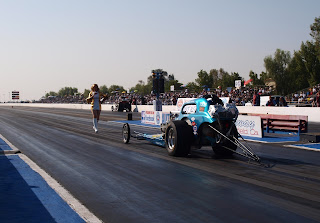 With the official House of Mouse back-up girl. It worked – Eily’s opponent was distracted to the point of parts breakage. 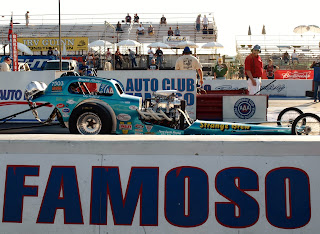 About one second before Paul Sadler snagged the Invisible Man shot. 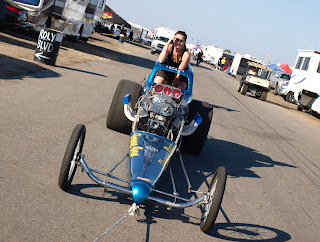 After the run, towing back to… 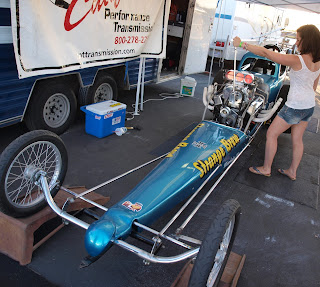 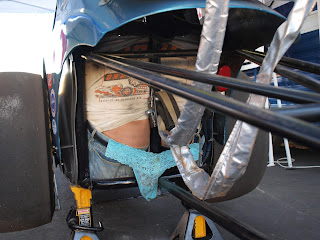 The end. This grease monkey mockup was installed many years ago. Eily updated it to suit the car’s new estrogen infusion.

Also in HRD’s coverage was a mention of meeting Richard Harmon. He’s still wheeling the Deuce roadster he built 60+ years ago. Not mentioned in the caption: As I interviewed Richard in the swap meet area, he reached into a vendor’s bin and pulled out the Oct. ’59 issue of Hot Rod Magazine featuring his car! Yet again, amazing, but not necessarily surprising. 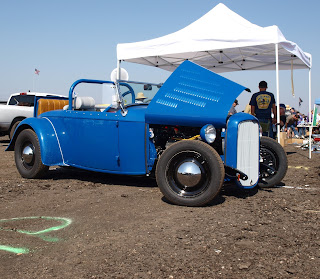 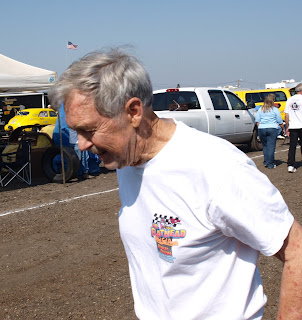 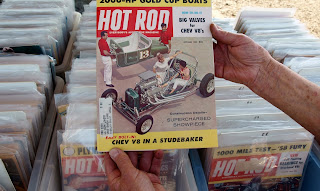 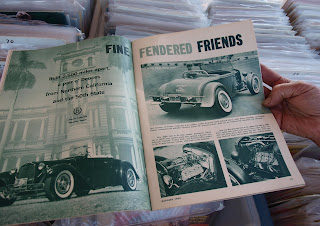 Rare sighting of Mr. Richard Harmon out of his car, yet still in his natural habitat.
I just love this stuff…

From the Going Nowhere Fast File (of which this is the World Premeir):
A special shout-out to my pals who are enjoying the Grand National Roadster Show without me this year. Finances dictated my absence. You guys will have to have my share of the fun. I’ve spotted several of you in online photos of the event and it appears that you’re doing just fine without me – the guy known for his disdain for car shows, until he walks into one. By the way, Steve Scott wishes he were there too and sends his regards. 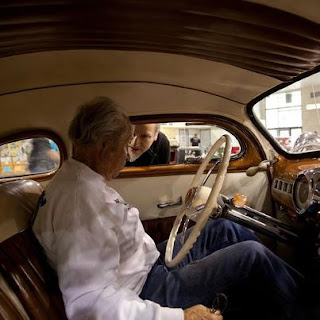 Rik Hoving reuniting Jack Stewart with the '41 Ford custom he built in 1947, at the GNRS! Rik wrote a book about the car's adventures ("The Bob Stewart 1941 Ford"), which I contributed to in a tiny way. Wish I were there for this once-in-a-lifetime moment.
Posted by Scotty Gosson at 3:40 PM No comments: