Uh, where were we, Scotty?

When we left off, you were turning 18 years old. This has been a long break! But you were about to make the transition from drag reporter to drag racer, via a chance encounter with Ralph Guldahl Jr. at Brownie's Snack Bar.

Oh, yeah:  my premature retirement, at the ripe ol' age of 18.  I'd dropped out of high school in my final semester to (A) take a fulltime job in a machine shop, and (B) move into an apartment one block off of Van Nuys Boulevard, and (C) buy a '65 Formula S Barracuda from a local racer -- BIG missteak (the car, i.e.).  It might've been the quickest and fastest small-block Mopar that regularly ran 'Fernando.  If memory serves, Ron Neidorf was deep into the 13s at about 110 mph by the time the "For Sale" sign appeared in the biggest rear window ever installed in a production car.  The good news:  He was asking only $1500 for a two-year-old car with an Art Carr manual TorqueFlite, big Isky cam, Exhaust Engineering's prototype set of fenderwell headers, etc.  The bad news:  Ron planned to pull the 4.-something rearend and the eight-barrel intake in favor of the stock gears (3.08:1?) and single carb.

I agreed, not knowing how incompatible that nasty, solid cam would prove to be with the rest of the combination.  The car still SOUNDED like a 13-second machine (damn quick for the street, for that time), but it couldn't quite crack the 14s, no matter what I tried.  Worse, after giving up my San Fernando job to race on Sundays, I broke the output shaft driving to work one day.  Lacking the dough for a pricey Art Carr rebuild, I settled for a stock TorqueFlite, "just until I save up some money" -- which never happened.  Now I had the wrong converter to go with my wrong camshaft, slowing e.t.s from 15.0s to 15.50s.  My racing career was over, and so was my writing career, it seemed.  I was too proud to beg Harry Hibler to get the job back, and too embarrassed to show my face at the track.

Luckily, my sister, Debbie, was working the counter of Brownie's Snack Bar the Sunday in late '68 when Ralph Guldahl Jr., fulltime Lions publicity guy, showed up and asked how he could get in touch.  Ralph was and remains the best drag-race reporter ever, in my humble opinion.  He called the house and asked whether I'd be interested in covering the Sunday bracket-racing program, while he continued doing Saturday night's feature shows.  I jumped at the chance to get back in the game, especially at such a prestigious track.  I can't say that my skill level was of Lions caliber, but the only people reading Sunday's stories were the racers themselves, and I always made Monday's deadlines at the various drag rags, so nobody seemed to notice that I wasn't ready for prime time. 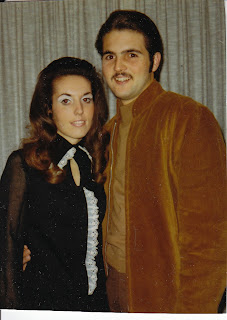 That changed in a big hurry when Guldahl got fired by C.J. Hart, who asked me to cover Saturday's weekly pro shows.  Again, I quickly agreed, even though I'd be commuting 40 miles each way not once, but twice, every weekend.  I'd just taken delivery of a new '69 Road Runner, gas was cheap, and 19-year-olds don't need to sleep, right?  Following "Digger Ralph"'s act was impossible, of course, but I knew that Lions had been a springboard to Petersen Publishing Company for other scribes and photographers, and hoped to do the same, someday. 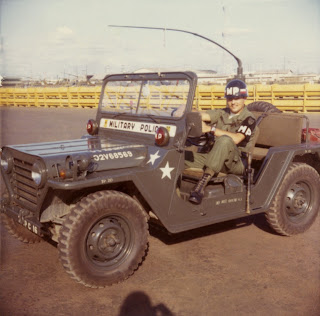 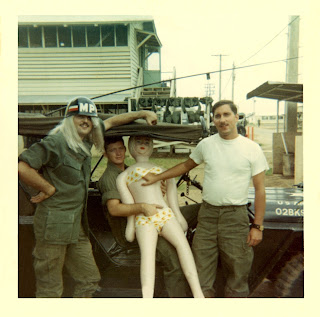 With fellow MPs in Vietnam, 1970. "The closest I'd get to a woman in 14 months and 7 days"
In a roundabout way, that's exactly what happened -- but not before Uncle Sam got done with Specialist Four Wallace, draftee.  I worked my last race, an all-motorcycle event, the Sunday before my July 8, 1969, induction.  After extending my tour of Vietnam to 435 days to earn a five-month "early out," I got my old Lions gig back, briefly; within weeks of that Feb. 1971 return, Hart got into a big hassle with the Lions Clubs Board Of Directors.  When he suddenly quit, so did several family members.  Most of the other staffers also expressed intentions to leave, in support.  However, as Bob Dylan wrote, the others who promised to stand behind C.J. when the going got rough changed their minds, unbeknownst to the Harts and me.  Nevertheless, I'd grown weary of spending every minute of my weekends either at the track or commuting or writing race reports.

I'd also gained enough confidence to send samples of these stories to magazine editors.  When Don Evans bit on my pitch to cover OCIR's Hang Ten Funny Car 500 on Memorial Day (see Aug. '71 HRM), I began an off-and-on freelance career with then-Petersen magazines that continues to this day, 40 years later (as occasional HRM contributor and contract editor of Hot Rod Deluxe).  Whew!  Are we done yet, Scotty?  Are any of your readers still awake?

Dave, the SGE readers may be the only humans that can function on less sleep than you! Frankly, they scare me. But on their behalf, we're all glad you survived Vietnam... So, your writing conveys a pretty deep passion for drag racing. If that isn't genuine, you're the world's most convincing writer! Did that passion bring you to this point and is it still alive?

Yes and no:  I'm still passionate about quarter-mile drag racing of all kinds, but not modern fuel racing.  There were times, during my stints as Drag News editor (1975-77) and Hot Rod feature editor (1977-80) and Petersen's Drag Racing editor (1984-88), when I covered every day of every NHRA national event.  I don't even go, anymore.  My last one was the 2010 Winternationals, but I was only there to cover the Golden 50 collection for Hot Rod.  I sat through the first Funny Car session on Thursday, but made it only halfway through the fuelers - always my favorite category - before the painfully-loud commercials and classic rock music drove me out of the stands.  I spent the rest of the day at the NHRA Museum.

Sadly, that's a pretty universal experience anymore. As a photojournalist, do you have a preference between writing or photography?

Writing and editing are my strong suits.  Although I think I've got a decent eye for photography in the pits and behind the scenes, I'm lousy at action, and have the hundreds of rolls of black-and-white film to prove it.  I've seen just about everyone's film, over the years, and almost nobody is good at both.  My father and Guldahl are two exceptions - and Dad shot most of his published work with an early Polaroid!

Ironically, I'd rather be doing what I was doing right before I signed this one-year contract:  writing and shooting freelance articles for Hot Rod and Hot Rod Deluxe, supplemented by Social Security (for which I'll qualify this October).  I loved what David Freiburger was doing with Deluxe, and he treated me real well.  Unfortunately, freelancing has always been a feast-or-famine deal, and there are far fewer outlets than ever for the historical stuff that's become my niche.  One downside of self employment is making minimal Social Security contributions, and I haven't had a real job, with payroll deductions, since leaving Hot Rod in 1980.  That's why I'll be working 'til I tip over - probably onto this damn keyboard, if I don't stop staying up all night doing dumb things like this.

We're all so glad you're this dumb! What does the future of drag racing look like? Or does it even have a future?

I'm confident that drag racing will survive, in various forms.  I can't think of any other sport that continually spawns spin-offs.  Nitro nostalgia is my favorite form.  I've been fortunate to live in the state where front-motored fuelers made their comeback, in the late '70s and early '80s.  With the recent additions of cacklers and nostalgia floppers, I'm able to see and hear and smell more than 100 different blown-fuel cars in a single weekend (California Hot Rod Reunion), just five hours from home.  That event and the modern March Meet are the next-best things to traveling back in time to the mid-Sixties' U.S. Fuel And Gas Championships or OCIR Manufacturers Meets.  I'm still amazed that people my age (61) - whether racers or fans or media types - are getting a second chance to do this, let alone at Famoso Drag Strip!

I know - it feels like we're really getting away with something! Talk about cheating the clock... Bonus question: You're known as one of the legendary hot rod funsters. What's the most fun time you've had in your career?

Walking through the big, glass front doors of Petersen Publishing Company on Sunset Boulevard for the first time as a Hot Rod staffer, in May 1977.  I was reminded of that feeling during a recent visit to that abandoned building. 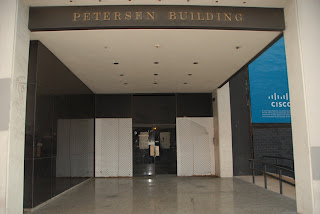 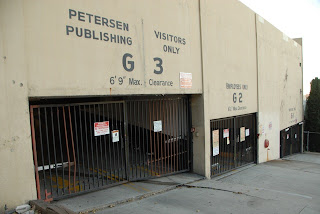 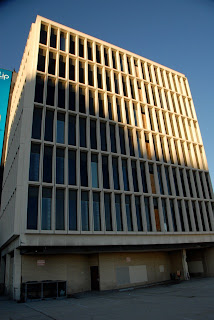 The Petersen Building (or 'Polar Bear Square', in honor of a mounted mamma bear on the top floor): 8480 and 8490 Sunset Blvd, on the strip. "Robert E. Petersen sold the prime property to a developer after selling his company in 1996, but the City of West Hollywood rejected plans for a multi-level parking structure. Ironically, our old parking garages and back lot are being used for exactly that: Overflow parking for nearby bars and nightclubs. Abandoned and vandalized. Sad sight, yeah..."  Photos by Dave Wallace Jr.


Double bonus points question: You're a shoe-in for Lifetime Achievement and plenty more awards. If you don't live long enough to receive them in person, what message would you like conveyed to the awarding parties? What will be your epitaph?

Jeez, Louise, will this NEVER end?  Sigh.  Oh, all right; flattery will get you everywhere.  I can't imagine a bigger honor than my induction into the Int'l Drag Racing Hall Of Fame, with my whole family and a couple of dozen close pals on hand.  We partied for five straight days and nights in Florida.  It was the last time I saw my best friend, Pete LaBarbera, who passed away this year.  (See new issue of Hot Rod Deluxe for more about that.)

Even though I've made more missteaks in print than possibly anyone during 47 years of this, I hope I'm remembered for getting the facts right most of the time; for being fair; for speaking truth to power, regardless of the personal consequences; for convincing a reader that my words were entertaining and/or educational enough to justify the 25 cents (Drag News) or seven bucks (Hot Rod Deluxe) that he paid for that particular publication.

Then Dave laid his head on his keyboard, spent - crashing and burning into a hard sleep. Shhh... (But get this: He left his family photo album open! Gather around, you guys and get a load of this stuff! Just don't wake him up!) 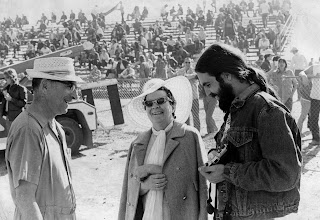 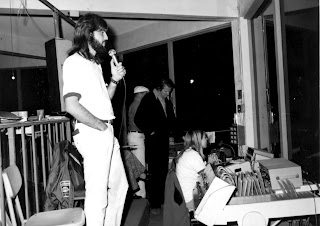 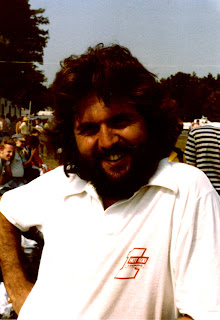 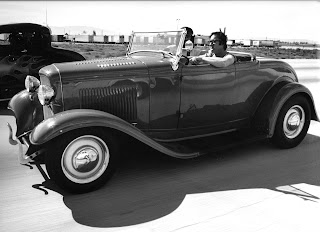 Somewhere in America with Gray Baskerville. Year and photographer unknown. 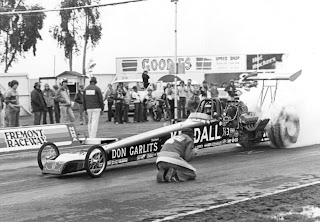 "No ear plugs! I hurt my hearing on this one. It was drizzling, but the HRM cover was already printing, promising a feature on 'Big's' new car". Fremont Raceway 1980. Photo by Jim Bernasconi 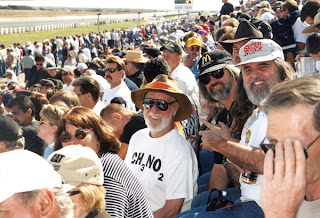 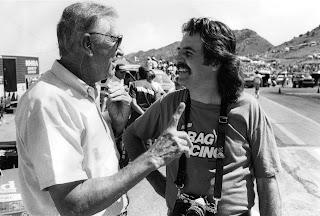 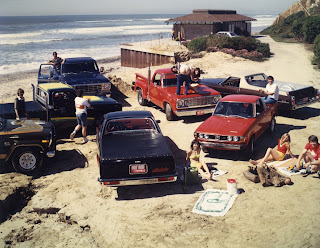 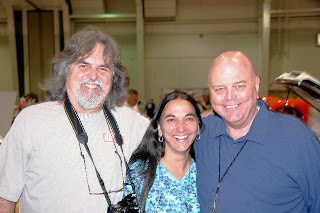 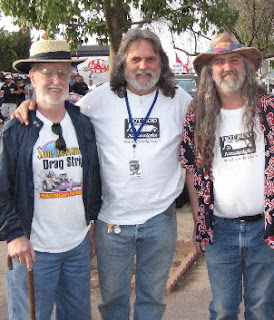 Senior, Junior and Sky Wallace, at the '07 March Meet. 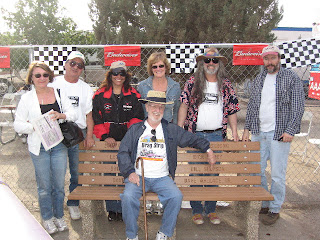 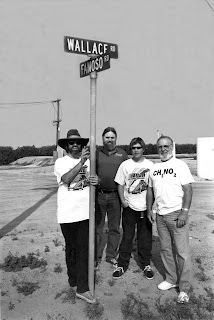